As I neared my fiftieth birthday, life decided to give me a gift. Without changing any exercise or eating habits, it said, “Here, have this extra twenty pounds. No need for thanks, it’s yours to keep.” Since I speak publicly, this meant purchasing at least on new “fat suit.” After a lot of shopping, I decided to order one online, of course to do that they need all of your measurements. My daughter volunteered to assist me.

Everything was going just fine until we got the “measure your stomach at its largest point”. When the tape read forty inches I winced. Ok, I know that may not seem like much (or maybe it does!) but when you take into account that I had a twenty-nine inch waist when I married and only measured thirty-four inches up through that fateful year, it was a shock. The number on the tape mocked me like a schoolyard bully. My daughter, being the epitome of encouragement, tried to make me feel better saying, ‘Ohhhh dad, that not too bad. Here I’ll measure my stomach.’ At that point, she was with her first son. She wrapped the tape around her thirty-five week, basketball shaped week torso. Fourty inches exactly.

“Geeee thanks …I feel so much better!” We laughed so hard we couldn’t see straight.

In the midst of this writing life, it’s easy to focus on the bad things. How much we didn’t write, agent rejections, not finding a publisher, will people read our novels, will they like them, feeling alone in the process or lost… We start to feel like weight-gaining-50-year-olds in need of a new suit. But, hang on for a second. Let’s take the tape and put it around something else, shall we? Each of us, at whatever level, in whatever form, get to take our dreams, thoughts, desires, fears, memories and more, and put them into words. When other people read what we created it changes them, for good or ill, large or small, it happens.

What a wonderful, joyous, smile-inducing thought. In the United States, we are nearing Thanksgiving, so join me and celebrate, we honored few, for we are privileged to see our dreams come to life. 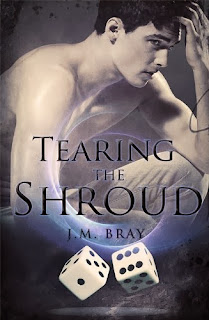 Fall in love, be possessed, hunt a sorcerer and save the world — and Vincent thought calculus was tough.
984 — Vincent expected college to be about freedom and girls, but then the nightmares of sorcery, monsters and other worlds began. Not even the surprising attention from his dream girl, Julie, could shake them.

Before he's even nailed his second date with Julie, he's possessed by Coleman, a warrior from another realm. Coleman is hell bent on defeating the monstrous Kafla who threatens to tear into Vincent's reality, changing both his and Coleman's worlds forever. They have one chance to stop them: Vincent must allow Coleman to share his body and wage war against the sorcerer.

Now it's up to them, the women they love, and Vincent's rag-tag bunch of role-playing and gaming friends to save the world, or see 1984 descend into the apocalypse.


J.M. Bray lives in Southern California with his college sweetheart and their two dogs. After a lifetime together, they are happier than the moment they met.

When not writing or working his "day job", he loves to cook, play the guitar, and travel with his wife. Every chance he gets, he races an old Porsche named "Tuffy" at tracks in the southwest.

Posted by Eleni Konstantine at 15:13