Watching movies is a passion of mine and I love it when the DVD includes those Special Extras as part of the package. You know, the section where you get the behind-the-scenes action or more insight from the actors about the characters they portray?

Once I connect with a character I like to know more about them – snippets of their personal history, trivia, and interesting facts. So, one of the things I do for each book I write is come up with a Special Features file for the characters in my books.

Without further ado, I’d like to introduce you to Arek and Imhara, the hero and heroine of my newest release in the Light Blade series, ALLEGIANCE SWORN.

Background: Arek's parents were Light Blade warriors. His mother was captured and raped by the demon leader, Savyr when he was 3 years old. She gave birth to Annika Gannec, his younger half-blood sister (whose story is portrayed in VENGEANCE BORN). His father committed suicide on learning of his mother's capture.
Arek was brought up by Davyn, his maternal grandfather. Thanks to Davyn's embittered influence, he grew up hating everything demon and made it his mission in life to kill as many of them as possible.
He held the position of Kalan's Second-in-Command until it was presumed he was killed in a rescue mission-gone-wrong (in ALLIANCE FORGED - Varian, the Na'Chi leader took his place at Kalan's request to help forge the alliance between the humans and Na'Chi).  Arek was actually captured by  Na'Hord raiders and transported into demon territory to be sold as a slave.

Skills: Arek is a Light Blade warrior - one of the best. In human society, Light Blades are highly respected for their skills and dedication to upholding the Lady's tenets. They are the protectors of all. Arek’s Gift from the Lady, the power to kill with kinetic energy, is so strong he's able to direct it through any weapon or via touch.

Interesting facts:
•    Kalan is Arek's best friend. They met as children and trained as Light Blade warriors together. He considers both Kalan and Kymora the brother and sister he never had.
•    He cherished the time he spent with his paternal grandparents on their farm outside Sacred Lake. Helping them with the daily grind of chores was something he thoroughly enjoyed as he was able to leave his studies and training as a Light Blade warrior behind. It also gave him time away from Davyn and his never-ending lectures on his obligation to avenge his parents' deaths.
•    Arek froze the first time he faced the Na'Reish in battle. If it hadn't been for Commander Yevni's intervention he would have died on the battlefield.
•    He was the first to discover the information that the Na'Reish and humans used to coexist peacefully together, and those with Gifts from the Lady were actually of mixed blood (ie.Na'Chi).
•    Arek is highly respected as a Light Blade warrior and leader, yet quite openly admits he'll never make a good Councilor given his outspoken attitude and lack of patience with the political arena. He's insulted almost every member of the Blade Council at one time or another, and been ejected a number of times from meetings because of his lack of diplomacy.
•    His greatest fear is to become a blood-slave of the Na’Reish. 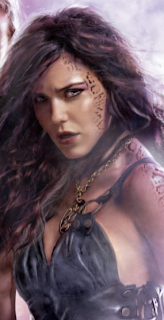 Background: Imhara belongs to the Clan Kaal, one of twelve Na'Reish Clans. Their territory is geographically isolated by a mountain range and they control Skadda Pass, a well-known slave-route used by Na'Reish patrols and raiders, to sneak into the southern provinces of human territory. Imhara monitors the pass and all traffic, taking advantage of her rank as Na to demand tribute from those who use it, and rescue humans captured for the auction block.
As the only survivor of an assassination attempt on her entire family five years ago in a raid designed to seize control of her Clan and Skadda Pass, she took her father's place as Na during a Clan Enclave, foiling Savyr's (the demon king’s) attempt to claim her family's territory as his own.

Skills: Imhara was taught by her parents the importance of responsibility and leadership from a young age, even though her older brother was groomed to take on the role as Clan leader.
Her father also insisted she train and learn weapon skills and strategy. After her family was murdered and to avoid any further assassination attempts, Imhara honed her fighting skills - an usual move for a female Na'Reishi society.
Imhara has also learned the art of deception and lives a double life within a culture that despises the Lady and her tenets. She's an advocate of the Old Ways - honoring the Lady as their deity and embracing a lifestyle where humans, Na'Chi and Na'Reish live together in peace – while her alter-ego, Na Kaal, has developed the reputation of being a tough, ruthless leader who enjoys taking human male slaves to her bed (a proclivity frowned upon by most of demon society).

Interesting facts:
•    Imhara and Rassan (her Second-in-Command) became close friends during her teens. They met when her father insisted she learn fighting skills with his army of warriors. Rassan was one of the young trainees.
•    Flaunting demon convention, Imhara prefers the comfort of wearing breeches & a shirt to dresses.
•    She is the only female leader among the twelve Na’Reish Clans – leadership positions are strictly patriarchal but as she was the only surviving heir after her family was murdered she claimed the title.
•    As part of her persona as Na Kaal, Imhara has chains and shackles attached to the corner posts of her bed to foster the perception that she takes unwilling, human lovers.
•    Her favorite drink is k'sa, a hot, creamy, strong nutty flavored beverage popular among the Na'Reish.
•    Her long-held dream is to find a lover who can see past the label of Clan leader and her persona as Na Kaal and accept her for who she is.

Now that you know a little more about the lead characters of ALLEGIANCE SWORN, it’s time for you to share something about yourself (mwah-ha-ha-ha!!!).

Perhaps you have an unusual talent or gift, or – if you’re courageous enough – share your greatest fear or a long-held dream. Go on, be brave!

And because courage deserves a reward, I’ve put together a Light Blade prize pack to tempt you (tote bag, pen, notepad, magnets, bookmarks). Leave an email address with your comment and I’ll put your name into the draw. You have until (Aussie time) 6pm Sunday, 12th May 2013 to enter.

Good luck and I look forward to reading your answers! 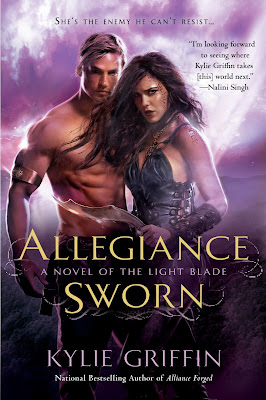 (Bk #3 of the Light Blade series)
She's the enemy he can't resist...
There is no mercy in the demon realm. No escape. In this place of desperation and conflict, anyone who is not purebred is virtually powerless. Until a demon leader seeks to unify the races…
With the alliance of the humans and the half-blood Na’Chi forged, the demon Na’Reish prepare for war by seizing human blood-slaves. Captured during a rescue mission-gone-wrong, Light Blade warrior Arek Barial finds himself claimed by a Na’Reishi female who offers him an unexpected choice.
Raised in the elite ranks of a society she abhors, Imhara Kaal lives a dangerous double life as a Na’Reish Clan-leader and an advocate for a caste-free life that honors the Old Ways. Openly rebelling against the Na’Reish would mean her death, unless she can find an emissary willing to present her petition to the human Blade council.
But Arek isn’t about to blindly follow a demon—despite the intense attraction growing between them. And while hatred for the Na’Reish is all he has ever known, Arek must learn to trust Imhara, or risk the destruction of all three races…
Excerpt here. 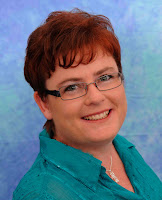 Kylie Griffin’s obsession with all things paranormal/fantasy started at an early age, when she used to imagine the jacaranda tree in her front yard was a spaceship used to defend the world from invading enemies. Writing stories seemed a natural extension to her childhood adventures.

Today, she’s a primary school teacher sharing her love for the written word with young children. In her spare time, she writes and reads all things paranormal.
Kylie lives in a small rural village in outback New South Wales, Australia, where she volunteers in a number of emergency service organizations in her local community. Visit her website at www.kyliegriffin.com