For our second 'A Bite Of' segment allow me to introduce the lovely Christina Phillips and her book FORBIDDEN. 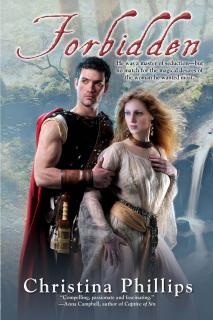 What inspired you to write it?

The idea for FORBIDDEN came to me literally out of the blue. This sexy Roman warrior stormed into my head one night, demanding to know where his Druid heroine was. Since Romans and Druids were deadly enemies I was instantly hooked! But there was also a High Priest lurking in the background, and he was deliciously twisted. Despite knowing Romans, Druids and ancient Wales were all hard sells in Romance I knew I had to write their book otherwise the hero would haunt me forever (not that I’m complaining. Maximus is gorgeous!)

And here's the snippet!

Her fingers stilled in his hair. He saw her struggle to keep the smile from her face. And then she trailed her finger over his brow, along the length of his nose and across the seam of his lips.

“Are you my man, Maximus?” Her finger paused at the corner of his mouth. So temptingly close, he could almost taste her sweet flesh.

“For tonight, my lady, I’m all yours.” His hand slid from her face to clasp her nape. “And you are mine.”

Carys wrapped his words around her heart, savoring them, secreting them hidden corners of her mind. She knew he spoke in lust, but it didn’t matter. She could imagine he wanted more than raw sex tonight, could pretend he was driven by emotions more sacred than pure, masculine need.

“For tonight,” she whispered, just so he knew they were equal on that point. Although the truth was she wouldn’t mind being his for eternity. If only that wasn’t such an impossible dream.

He gave a low laugh. “Always you must have the last word. Very well, we are each other’s for tonight, if that appeases you, my lady.”

Before she could assure him it did, he captured her lips, as if anticipating her thoughts, but thoughts no longer mattered, not when her Roman held her in such a close embrace, or teased her willing mouth with his tongue and nipped her tender flesh with his teeth.

Shivers skittered along her skin, hot shivers that mirrored the heat in her blood, the fire in her womb. She flattened her palm against his broad chest, delighting in the hard muscle beneath his linen tunic, the thunder of his heart against her fingers.

She slid her arms around his body. Granite strength and primal power radiated from every pore, thrilling her feminine senses, making her feel safe. Protected.

And yet she was the one who protected them both from untoward attack, here inside her own sacred circle.

Her Roman could never discover such magic.

~~~
Thanks Christina for taking part!

Email ThisBlogThis!Share to TwitterShare to FacebookShare to Pinterest
Labels: A Bite Of..., Christina Phillips, Forbidden, snippet