For many years, I have rescued injured, stray and “dumped” animals—particularly cats.

I’ve recounted many of my rescue adventures to friends, as well as the animals’ antics once they have rid themselves of their trauma. My friends have begged me to tell these stories to a wider audience—“please write a book about it!”

Two legs and Four will be the result.

People who devote their lives (and finances) to caring for animals will tell you that it is both a rewarding and a harrowing occupation. You see the best and worst of human nature and wonder how people can treat animals with such cruelty; often the abuse is done for “fun” (a kitten being used as a football is common). Animals can get dumped because they no longer suit the décor of the house (particularly after a renovation). One of my cats was rejected by his owner for this reason.

When I should have been writing I was on…

Picture this: two women sitting in a freezing cold car at midnight, drinking coffee and nibbling chocolate biscuits in a vacant block of land adjacent to a deserted country railway station.

Was this a covert police surveillance operation, or a drug-meet?

Nothing so simple. We were there to save a cat.

Word filtered through the animal rescue network of a black cat that had been left behind when her owner moved house. The cat’s kittens were taken away by the woman’s friend and dumped “somewhere” on the side of a road. When the mother cat returned to her “home” it was to find new people in the house, her kittens missing and a dog that chased her away. Although she returned to her former home, and then went to each neighbouring house in search of her kittens and a kind soul to take her in, neither eventuated.

When word reached me of this cat, my friend and I went to the address to see what information we could gather. We spoke to neighbours. Yes, there had been a cat, and they had sighted it; one told us that the cat had come to them, but they had chased her off because they didn’t like the look of that “skinny black thing”. What can you say to people like this? We took what information and description we could get and left as quickly as we could.

It seemed plausible that the cat had not left the area and the closest “shelter” was in an abandoned railway station about half a kilometre across the vacant paddock near her former home.

Leaving food under a pile of railway sleepers, we established a pattern and eventually we sighted the cat, though she would not approach us and would remain hiding until we had left the food and retreated far enough to be of no threat—only then would the cat emerge.

It was June and for many weeks my friend and I took it in turns to drive 60 kilometres each day to deposit food for the cat. We decided that we would have to catch the cat before “kitten season” and so, made our plans.

One day I went to the station and the cat came up to me for food and petting. I had my cat cage with me (always prepared) but when I scruffed the cat and tried to get her into the cage, she became a whirling dervish and tore my hands and arms to shreds (literally) to get away. It was a devastating experience and after that the cat would not come out, though she remained in the station and took the food, we never “saw” her again.

A cat “trap” was borrowed from another animal rescuer and a juicy chicken drumstick was cooked and attached to the spring in the cage. The trap was placed under the railway sleepers and we retreated to the car to wait for the cat.

After midnight we decided to check the trap and in the rain and hail made our way across the muddy paddock, hearts in our mouths—from fear (isolated vacant paddock) and anxiety—have we rescued her?

Shining our torches on the trap we were delighted to see that the cat was inside—silent and terrified.

We put a blanket over the trap and transported it to the car. Not once during the homeward journey, did the cat move or make a sound.

Once at my home I put her in the isolation room where all new arrivals spend time acclimatising. The cat—now named “Bonnie” was given warm food and milk, shown her bed of lambswool covers placed on an antique wrought iron four poster bed with her own oil heater close by. From the first moment she was called by her new name (I did know her former name but refused to use it), “Bonnie” immediately responded. She had a haunted look—most strays/abused animals have “that” look and once you have seen it, you never forget it. Some animals take years to lose that haunted face and eyes; some never lose it.

Bonnie stayed in the room for 3 weeks and made friends with the other cats by touching noses under the space between the bottom of the door and the floor. Bonnie quickly responded to her new life. She had not been “feral” for long and so was easily integrated. Eventually after being neutered, Bonnie left the room and established herself in the household. 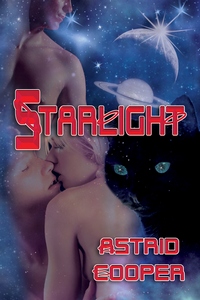 The “ugly, skinny black thing” now had a glossy coat like velvet and was shaped like a football.

Bonnie now sleeps on my bed on the right hand side and guards her space with ferocity. To this day, she prefers to eat cooked chicken, but I have managed to coax her to eat fish, and raw meat, but “entrée” is always chicken!

Cats Rule.
Some of the inspiration for the cat-shapeshifters in STARLIGHT came from my own cats...

So to celebrate all things felinus, I would like to offer a copy of STARLIGHT (a very sexy futuristic romance). If in Australia the winner can have the choice of either a digital or print copy; if the winning comment comes from an overseas reader, then I offer digital copy with a hard copy bookmark or two...

Posted by Eleni Konstantine at 06:24