Today's Darklight On... is with Christina Phillips. Welcome Christina!
How did you come to write speculative fiction? What attracted you to the genre?

Looking back it seems I've always loved the slightly weird! One of the first books that really grabbed my attention when I was a child was Charlotte Sometimes by Penelope Farmer, where the heroine traveled back through time every night to swap places with a girl who lived forty-odd years earlier. The book both freaked me out and fascinated me in equal measure and I don't think I've ever quite got over it!

As for why I write it - well, when I started submitting my work I sent an angel inspired romance to Mills and Boon who politely declined. Undeterred I then sent them a romance featuring a clairvoyant and although they gave me encouraging feedback on the writing it was my plots that were the problem :-) Since I'd decided M&B were my dream publisher it took me another five years before it occurred to me that maybe I should try writing the kind of books that kept running around in the back of my mind - which meant plucking up the courage to submit elsewhere (I'd got to know some of the lovely editors at M&B by this time!!!)
Please tell us a little about your road to publication.

I really didn't choose it - Maximus, the hero of Forbidden, chose me! Why on earth a Roman centurion came marching into my head that night and refused to leave until I discovered his story I have no idea. Although I've always loved reading historical romances and used to write historical stories when I was a teenager (and for some reason they always ended in tragedy!) it never occurred to me to actually write one with a view to publication. But since neither my single title contemporary or paranormal romances were hitting the mark with agents, and I had recently sold two paranormal/fantasy erotic novelettes to a small e-press, I decided I had nothing to lose by trying something completely out of my comfort zone.


Your recent release is Captive (which we featured in a Magic Thursday giveaway on 3rd Feb). Can you describe it for us.

A tortured warrior and rebellious Druid priestess have to overcome their past, put their trust in each other and face their deepest fears if they want to survive the invasion of their lands and the wrath of a spurned goddess.

And can I say, the cover artwork is absolutely stunning. Isn't it fabulous? It really shows the hero's deeply ingrained protective streak and the overall atmosphere is of looming danger. 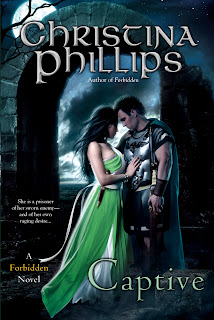 I went from being a compulsive plotter when I first started out (and by compulsive I mean I knew exactly what happened in each chapter even down to fragments of dialogue) to being a complete panster when I wrote my first full length paranormal romance. With Forbidden I started out knowing only that certain things had to happen at the end of the book (such as Carys and Maximus had to end up together!) but it wasn't until I was almost on top of that scene that I knew exactly how it was all going to come together. With Captive I was relieved my wonderful editor didn't insist on a detailed outline of the end of that book - because I didn't know it in advance!

But since then I've had to learn how to write a synopsis before I write the book. Root canal springs to mind...


Do have a favourite of your characters?
I have a very soft spot for Bren, the hero of Captive. He's suffered so much in his past and his wounded soul just haunts me.

Honestly? My favourite part is reading back what I wrote the previous day!


What can we expect from Christina Phillips in the future?

This is a good question, and I wish I knew!! I have several book ideas out there so if all the planets align I may well have three different series in the future. That's my plan for world domination, anyway!

I have so many fave authors I couldn't possibly list them all! Jean M Auel is a long time favourite of mine. I fell in love with her world building as a teenager and re-read Clan of the Cave Bear every few years. I'm also in the astonishing position of being able to say that many of my favourite authors are also friends! That's kind of surreal and always gives me a warm glow inside!

Nora Roberts Sign of Seven trilogy - these books were a fabulous and unexpected gift and are awesome!


Do you have a favourite spec fiction movie or tv series?
Well, surprisingly, I do love BSG!!!!!

Don't give up, no matter how rocky the road. It took me nine years before I sold to The Wild Rose Press and then another 15 months before my agent sold Forbidden to Berkley and I've honestly lost count of how many rejections I collected along the way. But once you sell it's all totally worth it :-)
CAPTIVE is out now from Berkely!!
Posted by Eleni Konstantine at 06:23

Email ThisBlogThis!Share to TwitterShare to FacebookShare to Pinterest
Labels: Christina Phillips, Darklight On