Magic Thursday: Representation of Gods in Myth with Efthalia! 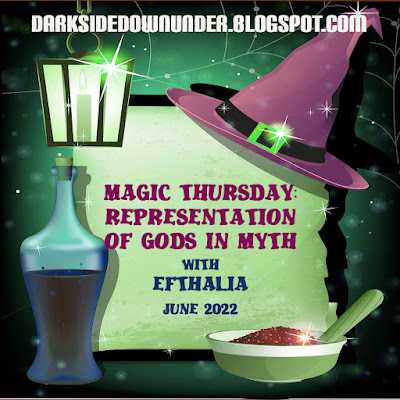 There is nothing consensual or romantic in this myth. Modern retellings try to play down the rape motif, which is a recurring theme in Greek mythology. I wholeheartedly commend the authors that have used the myth and gods in this way, but I could not do that. They are gods, and while everyone puts Ancient Greek Religion in the myth basket, the truth is that the Greek gods were part of a religious structure that was the nexus of polis (city) life. People built temples to the gods, venerated, dedicated, and celebrated them. To mock the gods in ancient Greek thought was offensive, and to a degree, horrific, as you could bring down their wrath. Which brings me back to, how do I represent them?

Well basically, as gods. That is where it begins, and that is where it ends. As a classics student, my ideas of the Greek gods have been shaped by my studies, so my representation is always going to reflect the body of work I have completed over the years. So, should we over-romanticize myths? That’s definitely in the hands of the author, and there is no right or wrong in this business, only what works and works well for the author.

Phoenix: The Rise
Book 3, Phi Athanatoi
She wants justice. He wants to make things official. But for a demi-god and vampire there are bigger battles.
Demi-god Carissa Alkippes has fought her equal share of demons and Olympian gods, when one battle ends another begins. Only this one may destroy the thin veil between supernatural creatures, gods and humans. To make things worse Zeus offers her a ‘get in and out of Olympus’ card, which paints a dangerous target on her back. Now she must get a handle on her power.
With new enemies hunting her down, Carissa must use everything she knows to protect those she loves from being collateral damage.
Xen Lyson, has seen much in his immortal life and walking Carissa down the aisle is at the top of his vampire list, but when an ancient libation bowl turns up, so does Discord and Death.
Now they have fight not only to protect humanity, but themselves too. Will they defeat their enemies in time to tie-the-knot?
ThePhi Athanatoi is a paranormal, fantasy romance series featuring; vampires, werewolves, witches and Greek gods. If you love stories with strong heroines, adrenaline-filled drama, prophecies, Greek mythology and immortal warriors, then you'll love the Phi Athanatoi.
Buy
Efthalia A few particulars about my demographic abode. I live in the beautiful city of Sydney, Australia with my husband and two children who keep me immersed in all things family.
My passion for writing was cultivated by the stories my mother told me as a child. At school I often day-dreamt of exciting new worlds where the heroine had super powers and would save the day. My English teachers told me on a regular basis that I should stop making up my own words. Well, that flaw is now my super power. Making up words, characters and worlds is all part of fiction writing and something I love doing.
I have an MA in Writing and am currently studying the Classics and Archaeology at Sydney University.​
You can find met at my website.
Posted by Eleni Konstantine at 07:30