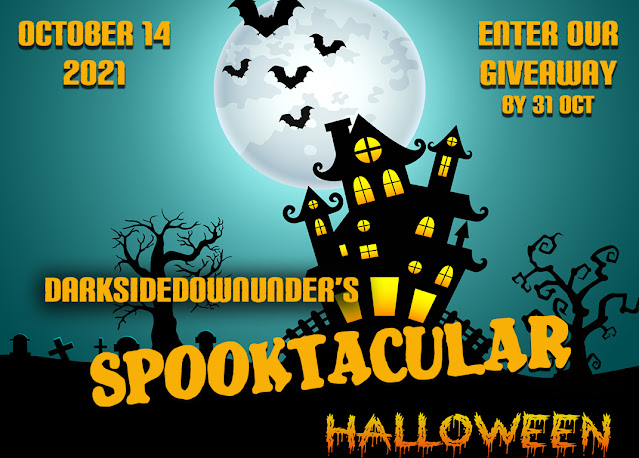 It's Spooktacular Halloween and few of our DarkSiders answered what they loved about Halloween or what their favourite Halloween read/movie/story was. 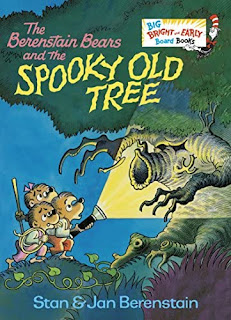 My favourite thing about Halloween is all the fun spooky stuff that is out and about on a daily basis. I adore little ghosts and bats and vampires and all that kind of thing!

Fave Halloween read - every Halloween I sit down and read ‘The Bearenstein Bears and the Very Spooky Tree’ with my kids, because I used to love it when I was a kid! 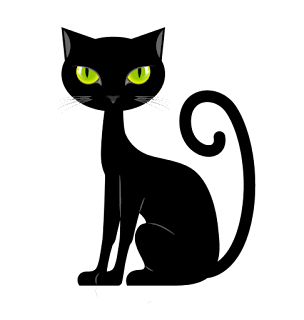 The thing I love most about Halloween is that this is a time when black cats reign supreme. Black cats get a bad rap, blamed for ill fortune by superstitious folk. I have been privileged to be slave to a number of house panthers over the years and have seen others shy away from them simply due to the colour of their fur. But instead of being harbingers of bad luck, my black cats have been a source of love and companionship, as have my non black cats. My current house panther/mistress, Justice, is the inspiration for Sadie in Spell Struck, and I love that at this time of year there are images of black cats everywhere so that people can see just how magnificent they truly are.

I don’t really like Horror on its own. It has to have a side of something like fantasy, adventure, sci-fi, comedy. Underworld is Fantasy Horror and is definitely my sort of thing.  I have a lot of favourites that pop up around Halloween on the subscription services.  Some that I have enjoyed are listed below. As I said, I can’t do just horror. 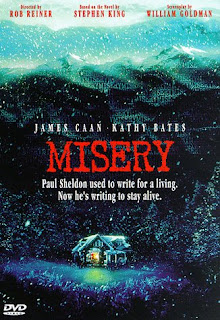 Favourites from the 80’s

The Witches of Eastwick

Favourites from the 90’s

Favourites from the 00’s

Shaun of the Dead

There are heaps more but I can’t think of them all. Feel free to chime in and tell what your favourites are.

As far as books go, I went through a horror phase in my twenties and Stephen King was popular at the time. IT scared me and I refuse to watch the movie. Misery is the book that stayed with me after reading it. Really does hit home the crazy stalker fan theme, but a hundred times worse. Koontz was another but some books were hit and some a miss. I must admit I haven’t read a horror book in ages. Funny how you go through phases and stages. 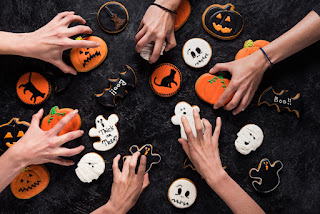 We recently started a tradition of having a big Hackett Halloween party every year. There are lots of decorations, spooky-themed food, and the only requirement for guests is that they MUST dress up.

Everyone has a blast--both the kids and the adults! 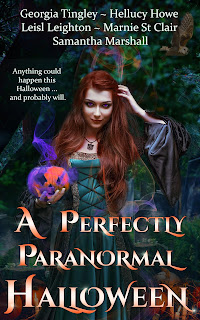 In regards to Halloween reads, we’ll I’d have to say two of my favourites are in the upcoming A Perfectly Paranormal Halloween - Samantha Marshall’s Headless and Marnie St Clair’s Good Riddance. They are both fun, emotional, sexy and slightly spooky reads with really engaging main characters and amazing world building. 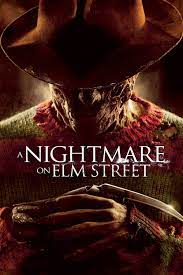 I was a movie horror buff when I was a teenager. After seeing quite a few, my brother and I would try and guess how the victims would die. There was a lot of overlap so when it was original, they would get a cheer from us. I'm not as much into horror now. I'm even behind in my watching of The Walking Dead. Still, I have to say that Nightmare on Elm Street is up there as one of my favourites. Something about not being to escape even in your dreams was, and is, terrifying to me. For books, reading The Amityville Horror gave me nightmares. I had to sleep with the light on for a few days.

However, I do love the fun side Halloween can bring - fun movies like Ghostbusters, Shaun of the Dead, and Zombieland, and of course the classic TV shows The Addams Family and The Munsters.

As part of celebrating Halloween here on the DarkSide, the above DarkSiders have provided an ebook each to be part of our Spooktacular Halloween Giveaway! 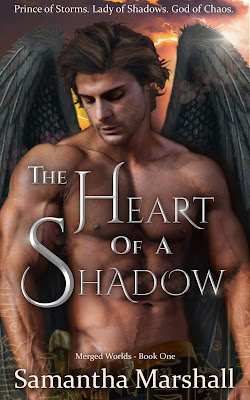 The Heart of a Shadow (Book 1, Merged Worlds)

Bound in eternal servitude by forbidden magics, dark fairy Liria Atlannon has no choice but to follow her mistress across the seas to Egypt, where Princess Ione of Atlantis will marry the great Pharoah Taos and become Queen. All seems well until Set the Anarchist, god of war and chaos, tries to steal the Princess Ione from her own welcome banquet, forcing Liria to reveal that she’s not just a handmaiden; she’s a weapon.

As Commander of the Pharoah’s honour guard, it is Prince Raiden Horushood’s duty to defend his brother at all costs – even if that means facing down a god he has no hope of defeating. Nobody is more surprised than he when Liria, the softly spoken handmaiden who spends most of her time staring at floor, not only turns Set away but injures him in the process.

As Commander of the Pharoah’s honour guard, it is Prince Raiden Horushood’s duty to defend his brother at all costs – even if that means facing down a god he has no hope of defeating. Nobody is more surprised than he when Liria, the softly spoken handmaiden who spends most of her time staring at floor, not only turns Set away but injures him in the process.

With the threat of an unpredictable god hanging overhead, Raiden begs Liria to join the Pharoah’s honour guard. Whilst he’s fascinated by glimpses of a woman who is as intelligent as she is powerful, there isn’t time for charm – if they are to have any hope of protecting the Pharoah and his Princess, then he and Liria must learn to work together.

Though Liria aches to become part of something greater, self preservation dictates she stay far, far away from the vital, strong, and irritatingly handsome Prince Raiden. For if the warrior angel gets too close, he’ll discover that the biggest threat to Merged Egypt is not Set at all – it is Liria Atlannon, damned by the magic which shackles her soul, steals her free will and shapes her actions… until all that remains is a shadow. 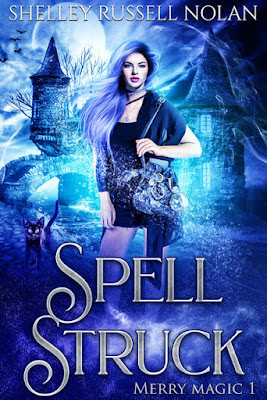 Magic may be her undoing

When Merry inherits a bookshop from a grandmother she never knew existed, the last thing she expected was to be transported to another world. But while claiming her inheritance, she accidentally triggers a spell that takes her to Tirana; a world where magic is real, and where her grandmother left behind powerful enemies.

Now those enemies are after Merry, and she has to return home before they catch up with her. With the transportation spell broken, and mages and enforcers on her tail, she flees with her grandmother’s familiar, Sadie. But the black cat can’t save her when she draws the attention of the mage guild. On the run and searching for a way to remake the spell to take her home, Merry encounters dangers that may prove costly to both worlds.

Merry must learn to wield elemental powers of Air, Earth, Water, Fire and Spirit to have any hope of returning home. If she fails, she will be stuck in Tirana forever, while an ancient enemy may gain the foothold it needs to rid both worlds of magic for good. 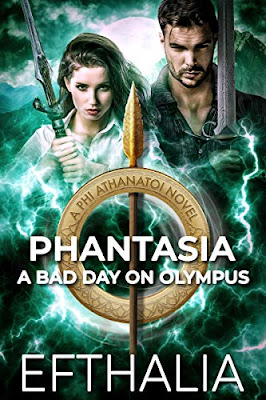 Torn apart by separate missions, can their love survive an impending apocalypse?

Demigod ex-cop Carissa Alkippes is hellbent on clearing her father’s name. But when she’s sidetracked into saving Zeus’ life, she’s forced into a dangerous mission to locate missing deities. To find them, she must face a horde of bloodthirsty demons.

Xen Lyson shouldn’t dwell on Carissa when he’s supposed to be stopping demons from feasting on humanity. But the sexy vampire worries her solitary journey to Olympus will put her in grave danger. And with absent gods causing devastating natural disasters, he must trust her father, Ares, to keep her safe. 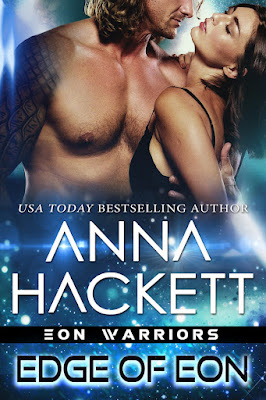 Framed for a crime she didn’t commit, a wrongly-imprisoned space captain’s only chance at freedom is to abduct a fearsome alien war commander.

Sub-Captain Eve Traynor knows a suicide mission when she sees one. With deadly insectoid aliens threatening to invade Earth, the planet’s only chance of survival is to get the attention of the fierce Eon Warriors. But the Eon want nothing to do with Earth, and Eve wants nothing to do with abducting War Commander Davion Thann-Eon off his warship. But when Earth’s Space Corps threaten her sisters, Eve will do anything to keep them safe, even if it means she might not make it back.

War Commander Davion Thann-Eon is taking his first vacation in years. Dedicated to keeping the Eon Empire safe, he’s been born and bred to protect. But when he’s attacked and snatched off his very own warship, he is shocked to find himself face-to-face with a bold, tough little Terran warrior. One who both infuriates and intrigues him.

When their shuttle is attacked by the ravenous insectoid Kantos, Eve and Davion crash land on the terrifying hunter planet known as Hunter7. A planet designed to test a warrior to his limits. Now, the pair must work together to survive, caught between the planet and its dangers, the Kantos hunting them down, and their own incendiary attraction. 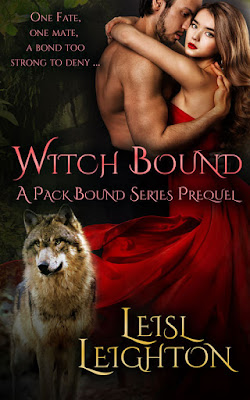 One pack, one coven, a destiny intertwined…

Five hundred years ago, facing extinction, a group of powerful witches united to create a pact with the Were to save witch-kind. The pact expelled an ancient evil, known only as The Darkness, that was blocking the Were from their wolves. With the Darkness destroyed, the Packs and their Covens grew strong as they thrived beside each other in their brand new world.

But the Darkness was not destroyed.

Skye Collins, has been brought up to fear her magic and shy away from Witch and Were alike. But when Jason McVale, the Alpha of Pack McVale, comes in search of her, she is intrigued and tempted. Her mistrust of magic and wariness of the intensity of passion she shares with Jason threatens her control – and if she loses control, she just might turn into the weapon The Darkness intended her to become all along. 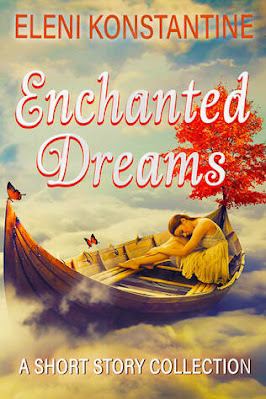 For your chance to randomly win, please fill in our giveaway form by 31 October: https://forms.gle/zfs1dsGy59v4m9vr8

Posted by Eleni Konstantine at 07:30