The gods of Olympus are, controlling, devious, and at times frolicsome and by no means trustworthy. Mortals are mere chess pieces that get tossed about for entertainment and pleasure brought on by gods desire to intervene with humanity. The gods play their relative roles of obstruction from the beginning to end in one of the most widely read classics, Homer’s Iliad.

The thing that sparks the whole controversy in the Iliad, is the utmost accountable goddess of meddling – Eris a.k.a Strife. For she fills men’s hearts with violence and hatred. It is easy to cast blame on her or redirect her actions as unstoppable sequences of events that have dire consequences. It is Eris who propels the first action toward the Trojan War, as you all know, by throwing the apple labelled ‘to the fairest’ amongst the goddesses, Hera, Aphrodite and Athena at the wedding of Thetis and Peleus’ (Achilles parents). Paris is then called upon by the goddesses to judge which goddess should own the title of the fairest. Naturally, the poor fool picks Aphrodite, because she offers him the most beautiful woman – Helen, hence the start of the most famous Trojan War. Why does she do it? The simple answer, her willingness to bring about mayhem is her birthright. She exists to bring discord whether to mortals or gods. Eris is essentially the spark that ignites trouble. 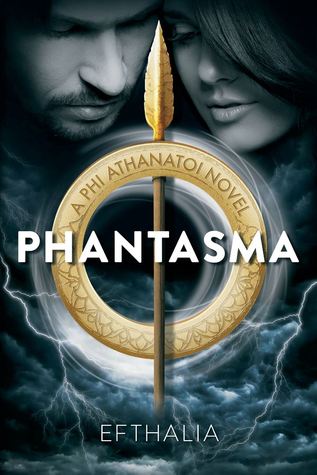 Another way in which the gods intervene through supernatural means is via dreams or thoughts that are specifically placed in one’s mind. Divination goes back to Ancient Egypt, the survival of New Kingdom documents (Book of the Dead) inform us of the possibility that dreams were a mode of divine communication, although divine discourse had always been the prerogative of the Pharaoh – who was seen as semi-divine. Dreams for many cultures were portals to the gods. I use divination in both my books and for my characters they work as a mechanism in legitimizing the choices and actions the characters take. For example, it propels them into action but not always. In Phantasma which is book 1 in my series, the dreams are a constant in my heroine’s life. She dreams of her hero but also of Hera. Hera gives her the gift of a child through her dream. It is important to remember that dreams for the ancients were a powerful transmission and not to be taken lightly. Dreams nevertheless were only one way in which the ancient Greek gods intervened with mere mortals.

The gods themselves were not without fault. They manipulated situations to their opportunistic advantage, they told lies, mourned their losses, cheated and had an array of human characteristics, thus they were compatible to the fundamental functioning of society and life within the Greek domain. Greek religion was not about the complete and ‘only’ worship of the gods. The gods were in fact, an everyday part of life, the pinnacle to religious sacrifice and participation. For the ancient Greeks, it was purely about the physical contribution with the gods.

I play with the theme of ancient religion vs modern in book 2. It was something I felt that my characters needed to address, but also something I wanted the reader to understand from a characterisation perspective. Particularly with the heroine, Carissa. The opening scene in book 2 kicks off in a church. Xen, a vampire and, head of the Phi Athanatoi has no reservation about stepping into a church. He understands his place in the here and now as well as, in his parallel world that resides alongside Carissa’s. He has lived through pagan worship to modern and comprehends the evolution of it. My heroine, however, is still coming to terms with the knowledge that the Olympian gods are very much present and intervening and that she is the daughter of Ares. She gets more than a good dose of the gods.

What we can learn from the intervention of gods is that they help in all spheres of human activity but sometimes it comes at a price. The gods were a significant catalyst to the fundamental functioning of the polis. It is therefore not surprising that Homer et al had them intervening in human affairs. 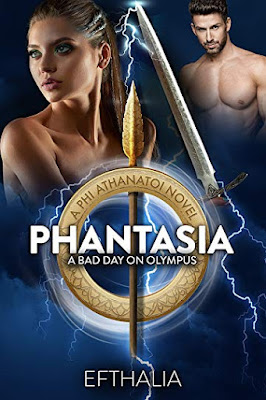 PHANTASIA
“A Bad Day on Olympus,” Book 2 in the Phi Athanatoi Series


What is it about?
A codex, a key and a missing tray of Baklava.


Blurb
When ex-cop-now-demi-god Carissa Alkippes steps over the threshold of the Olympian gates with her bad boy father, she has only one objective – justice. But Zeus shifts the goal post, nothing is straight forward with the Gods. Now she must step up and do as he has requested. With time against her, will she succeed?

Xen Lyson, immortal vampire and head of the Phi Athanatoi has his hands full with the evil that preys on humankind. To make matters worse he is troubled that Carissa is on Olympus and that he has no way of protecting her. His frustration is amplified when she re-appears and brings with her a colossal sized problem.

Posted by Eleni Konstantine at 07:30 No comments: