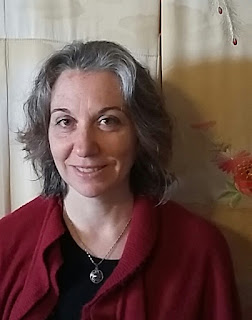 That’s a really tough one – I can’t remember a time when I didn’t read speculative fiction in one form or another. I was an obsessive reader as a child and I loved ghost stories, time slip books, anything based on a myth, anything that stretched my imagination really. I have been accused numerous times in my life of being too imaginative, but as a writer I think that’s a wonderful thing to be! I suppose I want to believe that there is more than what is in front of us, some mystery to life, and speculative fiction explores this in so many ways.

I’d say 80% plotter, 20% pantser. Although the pantsing (is that a thing?!) is usually coming from deep in my sub-conscious I suspect. Writing a trilogy, I need to have a clear sense of direction because I have to make story arcs pay off over three books. So that requires careful planning. And although my characters are real people, they are also shadows of the Commedia dell’Arte characters that they perform onstage, so how their stories play out in ‘real life’ in the book are echoes of what usually happens for those characters in the Commedia performances. That means I know where their stories are leading as well. Of course, one of your characters is always going to surprise you – they have minds of their own. And occasionally, usually in the shower, I have an insight into something that’s going to happen that I haven’t planned – but that’s when I figure my sub-conscious has been chewing it over and come up with an answer without me.

I have to admit I love Luka. He’s barely in Harlequin’s Riddle, the first book, but he becomes prominent in the second book. He plays Pierrot onstage and, like Pierrot, his guiding motivation is always devotion. People might describe him as ‘sweet’, but there’s a lot more to him than that. There is a depth and intelligence to him that means he can see the right thing to do. And he’s a wonderful singer! I collected Pierrot dolls and other items as a child, so I guess I’m bringing that obsession to life.

I’m writing book three of The Tales of Tarya, which starts with Harlequin’s Riddle. The hardest part of that is that I want to talk about what’s happening in the story, but I can’t tell anyone because ‘spoilers’. My poor husband will never be able to enjoy the twists and turns of the books, the surprises that lie in wait, because he is my sounding board to make sure everything makes sense. The third book brings in some incredible places I have been to and heard about in Thailand and India as settings for crucial scenes. It allows me to travel without leaving home.

What is your favourite part of the process of writing?

Letting my imagination roam. I have to keep a notepad by my bed because I tend to wake up in the morning and go ‘oh, I know why she’s doing that’ or ‘right, that’s that missing link I’ve been trying to puzzle out’. The mechanics of sitting at my desk and getting words on the page are crucial, but the story is really being written in those in between spaces where I’m not focusing on anything and my brain just goes whizzing around all by itself. Creativity needs room to play.

What can we expect from Rachel Nightingale in the future?

The second book in The Tales of Tarya will be coming out in mid-2018. This is all ‘in process’ at the moment – I’m waiting on feedback from beta-readers and on cover artwork from the amazing Nadia Turner (www.waywardharper.com) who did my beautiful Harlequin cover. And I’m nearly halfway through writing the final book. After that I plan to write a prequel which will be very much its own story, but will also explain the origins of what happens in The Tales of Tarya. I can’t say anything about that because it’s all slowly revealed throughout the trilogy. After that I have plans to take the concept of Tarya – that creativity opens a portal to another realm – to a completely different era in history.

How long can this blog post be? I have so many! I always list Ray Bradbury, for his skill with words. For brilliant storytelling and ideas I love Ursula Le Guin, Diana Wynne Jones, Susan Cooper, Alan Garner… In terms of current writers Sarah Pinsborough, Erin Morgenstern, the Illuminae books – there are so many wonderful stories out there.

I’m reading Geisha of Gion, by Mineko Iwasaki. This time last year my family and I went to Japan, and my favourite part of the trip was visiting the Geisha district, Gion, in Kyoto. It fascinates me that young women in Japan can still choose this as a profession, leaving high school to begin their training. The geisha life is full of such symbolism and richness of culture – I find it intriguing. At the same time I’m working my way through a list of books by other Odyssey authors, because since being published by them I’ve realised they publish high quality speculative fiction – so I’m halfway through Sanguine by Carolyn Denman and I’m about to start The Cabin Sessions by Isobel Blackthorn.

I’m a huge Buffy fan but anything intelligent with a good through-story really appeals. My family and I tend to binge watch spec fiction. We’re re-watching Warehouse 13 at the moment and recently finished Person of Interest, which I thought was an outstanding exploration of Artificial Intelligence. Many of the shows I enjoy are grandchildren of Buffy in that they come from the same writing team.

Write a lot. Read a lot. And put aside your screens (phone, laptop etc.) regularly to give your imagination some space to roam. 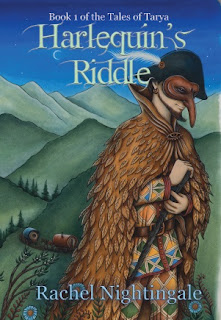 The Gazini Players are proud to present

For your Edification and Enjoyment

Tales of great Joy, and of great Woe

Ten years ago, Mina’s beloved older brother disappeared with a troupe of Travelling Players, and was never heard from again. On the eve of Mina’s own departure with a troupe, her father tells her she has a special gift for Storytelling, a gift he silenced years before because he was afraid of her ability to call visions into being with her stories.

Mina soon discovers that the Travelling Players draw their powers from a mysterious place called Tarya, where dreams are transformed into reality. While trying to solve the mystery of her brother’s disappearance, she discovers a dark cost to the Players’ onstage antics. Torn between saving her brother or exposing the truth about the Players, could her gifts as a storyteller offer a way to solve Harlequin’s riddle?

Harlequin’s Riddle is the first book in a Young Adult fantasy trilogy about the gift of creativity and where it can take you.


Rachel Nightingale is a writer, playwright, educator and actor. With a passion for story telling and the theatre, it was natural that her first fantasy series would centre on both.

Email ThisBlogThis!Share to TwitterShare to FacebookShare to Pinterest
Labels: Darklight On, Rachel Nightingale