I've been promising to write a paranormal cozy mystery for years and I've finally done it. Here's a sneak peak at Secrets, Spells & Murder.

Chapter 1
The day before Silver Moon Falls had its first murder, the townspeople woke up as usual, had breakfast, kissed their loved ones goodbye and went to work. I did likewise except for kissing a loved one, since I lived alone. After locking the door to my cottage on Appletree Lane, I began the walk to my shop carrying a newly made batch of Green Thumb spells.
On the way, I stopped to pet old Mr. William’s dog, while across the road, Erin called to her kids, just as she did every weekday morning, “Get in the car or you’ll be late for school.” As Erin pulled out of her driveway, she gave me a friendly wave. I waved back then turned the corner and set off down Main Street.
It promised to be a beautiful day. Wisps of white cloud trailed across the sky, and the breeze was heavy with the scent of the woods. I was all kinds of lucky to call this beautiful part of northern California home.
As I passed The Awesome Bean coffee shop, Sara Carter called out, “You want your usual this morning?”
“Please.” A few years ago, The Awesome Bean had been called Carter’s and they made the worst coffee in the entire universe. In an effort to improve their business, Sara had visited me for a custom-made spell. I worked hard at it, but even I was surprised by the results. Not only did she suddenly have the best coffee ever, the spell remained strong years later, which is unusual. As a thank-you, Sara has given me free coffee ever since. Win-win.
I was waiting for my cappuccino when Mayor Danny Blain stopped by for an Americano. He was around fifty, with strands of silver in his hair and eyes of muddy brown. Although of average height, he had an above-average physique and off-the-charts charisma. He was the mayor of both Silver Moon Falls and the larger town of Silver Moon Junction. Too bad he had no love for witches and our craft.
He acknowledged me with a curt nod. “We want to review your permit.” He meant the permit to practice witchcraft, which was at the discretion of the local council. Mayor Blain had been trying to close my shop for years. So far he’d failed, but that didn’t mean he’d stop trying. I wondered whether he’d change his mind if he knew that Sara’s coffee tasted so good because of my spell. I was tempted to tell him, but then he might decide to close the shop down and I couldn’t do that to her.
“I’m happy to meet with the council and discuss the matter,” I said, with a smile to let him know I was prepared to be reasonable.
He eyed the box I was carrying. “What’ve you got in there?”
“Just some Green Thumb spells. They’re very popular this time of year.”
“Hmm. Green Thumb, eh? People just throw it around their yard and a garden springs up?”
“It’s more like a really good fertilizer. Garden beds still have to be prepared, seeds planted and watered. But flowers are more abundant and they last a lot longer.”
“And that’s all it does?” he asked suspiciously. “I thought it was supposed to be magic.”
I could’ve told him the spell completely eliminated weeds, disease and pests, but Sara was calling out, “Coffee’s ready, Maddie.”
“Excuse me.” I hurried to the counter to get my drink.
Sara handed it over. “Have a great day.”
“Hope yours is even better.” I waved to Sara, relieved to escape from the mayor, and headed off to work.
My shop—Maddie’s Little Shop of Spells to be precise—was nestled between Kylie-Ann’s hairdressing salon and the Silver Moon Bakery. The aroma of cinnamon buns tickled my nostrils. Unable to resist, I bought one, holding the bag in my teeth as I juggled my coffee, the box of spells and keys to my shop. After opening the door without spillage, I dumped my box on the counter and bit into the delicious bun. I’d deal with the calories later by jogging to the falls.

When I’d finished the bun and coffee, I got to work unpacking and displaying the Green Thumb spells. The entire back wall of the shop was lined with shelves containing everything from Happy Household spells, which were designed to create a soothing home environment, to Memory spells for finding missing objects. The jars and bottles had pretty labels handwritten by my assistant, Autumn, who burst through the door at that moment in a chaotic whirl of curly auburn hair, sunshine yellow blouse, pink-checked skirt and ballet flats.
“Isn’t it a beautiful day?” she said. “You want me to help stack those shelves?”
“Sure,” I said.
Autumn wasn’t a local girl. She’d blown into town one day with nothing but a small bag, a mysterious past and the desire to change her life. I’d decided to give her a chance, and I’ve never regretted it.
While she finished displaying the Green Thumb spells, I headed out back to the storage room, where a small round table and two chairs stood near our rarely used coffee machine. On the opposite wall were more shelves filled with carry bags, bottles of water, cleaning products, a box of tissues and special orders waiting to be picked up.


I was checking the stock when the bells above the door jangled announcing the arrival of a customer. I heard a woman laugh and say, “What a very strange shop. We just had to come in.” She sounded amused in a superior kind of way, as though she was too smart to believe in magic. 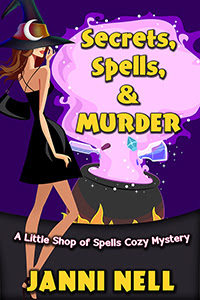 Janni Nell is the author of fun paranormal mysteries. Before she became a writer, she worked as a personal assistant, receptionist and sales clerk. Now she is happy to spend every day creating stories. When she isn’t writing, you can find her at dance class, Pilates or walking the dog. She is hard at work on her next book.