On the way home from Genrecon my seven year old son asked me why I like zombies. To spare him nightmares I simply replied that I thought they were wonderfully creepy and lots of fun. I certainly couldn’t tell him that I thought they were the ultimate monster, driven by an insatiable hunger for human flesh and relentless in their hunt for it. They have no conscience, no morals, just the need to feed. (For the record, I like my zombies slow and shambling. Those fast ones freak me out.)

My son’s question got me thinking about all the other creatures that populate the speculative fiction worlds that draw me in again and again. Paranormal, extra-terrestrial, supernatural, mythical or magical, I love them all. And I really love how the lines between the worlds can blur. Talented authors are blending more than one species into their stories, mixing the well-known with obscure or totally imagined creatures, turning what I think I know about the speculative fiction world on its head.

While I do have a couple of ideas for zombie stories in my ‘One Day I Will Write This’ folder, I decided to make reapers the focus of my debut urban fantasy ‘Lost Reaper’. When I started writing the first draft, over five years ago, I couldn’t find many books featuring the macabre little suckers. Since then I have seen more than a few popping up but have resisted the temptation to read them until after I have the next two books in the series written.

For ‘Lost Reaper’ I also had to come up with an entirely new race. At first I toyed with the idea of extra-terrestrials, and then came up with the Tr’lirians. Earth’s original inhabitants, and the root of many angel myths, they have hidden themselves away in a higher plane.

But that all changes when the Grim Reaper resurrects a seemingly ordinary human girl and turns her into a living reaper. Tyler Morgan has one week to discover the truth about her heritage if she is ever to enjoy her second chance at life and with more than one person wanting her dead that is not going to be an easy task.

I really enjoyed creating a new race of beings, and putting my own spin on the Grim Reaper and his underlings, but I’m sure it won’t be too long before those zombie stories start clamouring loud enough to get there turn to shine. 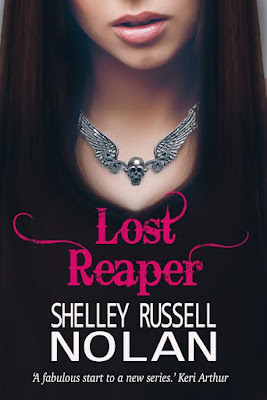 The first dead body I ever saw was my own

For twenty-five year old Tyler Morgan, being murdered was easy. Easy in comparison with working for the Grim Reaper. Jonathon Grimm may have brought her back from the dead in exchange for working as a reaper for her home town, Easton, but she has to find his lost reaper before she can enjoy her second chance at life.

Only … the lost reaper isn’t actually lost. He has a new body, a new life, and no intention of turning himself in.

Tyler begins the grisly task of reaping the souls of Easton’s dead while searching for the reaper. He could be anyone – the intriguing detective, Sam Lockwood: the handsome, wealthy Chris Bradbury; or the serial killer stalking the women of Easton. Women who bear an uncanny resemblance to Tyler.

As the killer closes in and Grimm’s deadline draws closer, Tyler discovers she is fighting a much bigger threat than the Grim Reaper and time is running out for everyone. 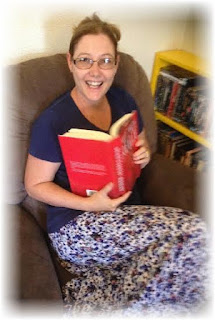 Shelley Russell Nolan is an avid reader who began writing her own stories at sixteen. Her first completed manuscript featured brain eating aliens and a butt kicking teenage heroine. Since then she has spent her time creating fantasy worlds where death is only the beginning and even freaks can fall in love.

Born in New Zealand, moving to Australia with her family when she was seven, Shelley currently lives in Central Queensland, Australia, with her husband and two young children. They share their home with a demon cat, a deformed budgerigar and two dogs that are fairly normal as dogs go.

Shelley loves to hear from her readers so feel free to contact her on Facebook or leave a review on Amazon or Goodreads.

Today's Darklight On is ... Jess Anastasi

When Its A Long Time Coming...

Its a little surreal that I'm sitting here writing this post, staring down the release of Atrophy on Monday. Nearly every author will say that they have a book or series of their heart, and for me, Atrophy is it. Anyone who has known me for a number of years will have heard all about this book and the longish journey I took in getting it published. So I'm sorry to those people, but I'm about to do some rehashing. If you want to skip down to the blurb, then the moral of this story is going to be the old cliche of "never give up." Or, if you're a Foo Fighters fan, then you'll appreciate the quote from the lyrics of their song Best Of You that I have written on the top of my whiteboard in my study: "I swear I'll never give in, I refuse."

So. Atrophy. I wrote this book back in 2008. I was post-studies (Diploma in Professional Writing and Editing), just had my first daughter and feeling the burn of not being published despite the fact I'd been writing for seven years. I had been struggling to do that magic thing all other, more experienced authors tell you, "find your voice." Despite trying to write historical romance, paranormal romance, and romantic suspense, and having the basics down, I wasn't quite "there" yet. Something was missing that would take my writing to the next level.

Around this time, I started working with my critique partner, Erin Grace, who basically went to town on my work (in a totally good way) and taught me a lot in a short amount of time. I'd been reading some sci-fi romances like Linnea Sinclair, but hadn't seriously considered writing a sci-fi romance myself, because I had this silly misconception that only super-smart people wrote sci-fi, and since science was never one of my strongest points, didn't think I could convincingly pull it off.

The idea for Atrophy had been sitting in my mind for years, ever since I'd watched Firefly about three or four years earlier. I'd also been heavily into other sci-fi TV shows like Stargate and Farscape.
After some back and forth with my crit partner, who may have even issued some kind of challenge, I decided to write Sanctuary, which would later become the first book I got published.
When I sat down to start Sanctuary -- which I was calling a paranormal romance set in space -- I was doing it for no other reason than fun and wanting to see if I could carry the weight of the sci-fi mantle.
And something happened. Words flowed. Characters cooperated. Dialogue was easy. It was like nothing else I'd ever written before. Sanctuary was only novella length, but by the time I finished it, I knew I'd struck the muse's chord perfectly. I also knew that I had to write Atrophy.

The only two things I knew when I started Atrophy was that I wanted to write a Firefly-inspired story about a close-knit crew working and living on a small ship. I also wanted the captain of that ship to be seriously dark with one heck of a tortured past. And when brainstorming with another writing friend of mine (who was more into screenplays at the time), she had a character named Rian, which I immediately fell in love with (the name, not the actual character). While she wasn't sure what she was doing with her work, I asked her if I could "borrow" Rian and the captain of the Imojenna came to life.

When I'd finished writing Atrophy, I knew that I had something unique in my files of unfinished and unpublished manuscripts, something I'd never be able to recreate even if I tried. I had discovered my voice, and I had written the book of my heart.

The journey of getting this book published is another long story, filled with many, many, many rejections. At the time it was frustrating, but now I can see that everything no doubt happened exactly how it was meant to. When I sent Atrophy to Entangled and they were so excited about it -- particularly my editor who helped me put the final shine into the story with some very awesome editorial advice -- I knew I'd found the right home. The home Atrophy was meant to have to see its full potential.

Some of the pre-release reviews have compared Atrophy to Firefly and its only made it all that much more surreal because Joss Whedon is my idol (seriously, I would pretty much fan-girl and die if I ever met him).

And like the final touch to what is already an amazing gift, my publisher surprised me with the mother of all release parties -- they're hosting a live viewing event on twitter featuring the pilot episode of Firefly.
Yes, this was a long time coming. But I can say that it was definitely worth the wait. 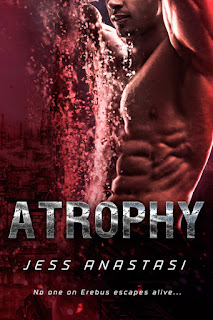 No one on Erebus escapes alive...

Twelve years on the prison planet Erebus makes a man long for death. The worst part for Tannin Everette is that he was framed for murder. He’s innocent. When the ship Imojenna lands for emergency repairs, Tannin risks everything to escape…only to find himself face to face with the captain’s undeniably gorgeous sister.

Zahli Sherron isn’t planning on turning Tannin in. In fact, she actually believes him. Sure, he’s sexy as every kind of sin, but he’s no criminal—so she hides him. But no one escapes from Erebus and lives to tell about it. With every day that passes, Zahli further risks the lives of the entire crew…even as she falls in love with a man she can never have for herself.