Today's Enchanted Orb post is with Maggie Mundy who is celebrating her latest release, Scarred Protector and the inspiration behind her series.

Maggie Mundy: How do you get your inspiration?

For me it can come from all different sorts of places. I find a single song lyric can be the basis for a whole story. Other times it might be something on the news or a documentary on TV. With the Midworlder Trilogy I wanted to have a different take on angels and demons.

A lot of the books I read with angels in were based around the religious concept of what these beings were. I came up with the idea of them being aliens and the idea that all the myths surrounding these beings were just that, myths. Of course this meant I had to create a world they had originally come from and why they were on Earth.

I hope you come on the journey with me with the first two books in the series. I am working on book three, Lost Protector as we speak. 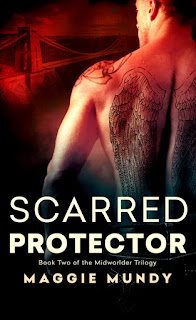 
Angels and demons are not what you think. They are aliens, and the Midworlders are their representatives on Earth. An Angelic Midworlder called Heath goes to the aid of Evie who is about to be attacked by Demonics. He soon discovers she can see the angels and demons around her and is in grave danger. He is captivated by Evie who has physical and mental scars like him. They are tortured souls who are deeply connected by his past. There is an evil lurking inside Evie that could kill them both.

Maggie Mundy lives in Adelaide, Australia and is a member of Romance Writers of Australia (RWA), and the local chapter SARA (South Australian Romance Authors). She recently completed a Bachelor of Arts in Drama, English and Creative Writing at Flinders University. She had a short story published in the RWA Topaz Anthology Little Gems in 2010 called Sea and Vines. She has four books out with Rogue Phoenix Press. Two erotic novellas called Blood Scent and Blood Oath and two paranormal romances called World Change and World Apart. She also has two paranormal books out with Soul Mate Publishing called Hidden Mortality and Unknown Protector.

She has also performed for many years in corporate entertainment for which she wrote her own sketches, which probably explains why her head is so full of characters. She loves writing romance but thinks falling in love can be scary, especially in her stories where creatures of the night really exist.
Twitter | Website | Facebook | Goodreads | Pinterest | Blog | Soul Mate Publishing I grew up reading epic fantasy books among others, so it seemed logical if I was going to write a book that it wold be fantasy. The first of a trilogy at 120,000 is still sitting on my computer. I then branched into paranormal romance when I started to read books in that genre. I really like the blend of magic with the everyday. I have started to write contemporary romance and women’s fiction but I have to be strong or the magic and the chopped up bodies will be trying to get in there too.


Are you a plotter? Pantser? Or somewhere in-between?

A plotter, though I have tried to be a pantser, but find I need a rough guide. I like to write out a few sentences for each chapter and work from them. This is not to say things have not gone off in a completely different direction. I was writing the second book in a trilogy recently and to my surprise, someone I thought was dead turned up. The muse sometimes say. ‘Hey you, I want to go this way.’


Do have a favourite of your characters?

I love the hero and heroine from my book Scarred Protector coming out next month. Evie is tough and feisty and won’t give in, and Heath is dark and brooding and a bit of a present day Mr Darcy. I should have had him in a wet shirt scene in the book. These two have pasts that will affect their futures together. Did I mention I make my heroes suffer?

Lots. Worlds Reclaimed is the final book in my Earthbound Trilogy. If you love vampires, werewolves and alternate worlds, it could be your thing. Lost Protector is the third book in the Midworlder Trilogy. More angels and demons fighting over Earth. On the contemporary side I’m writing a series based in Los Angeles. Lots of movie stars and hot sex.

Thinking about the story and suddenly getting that moment when you know it has come together and makes sense. I also love the bit when the words flow and the story just seems to happen. Like most writers I also know what it feels like to get stuck. When that happens I go back to my goal, motivation, conflict system and usually work out what is missing.


What can we expect from Maggie Mundy in the future?

I have an idea for a science fiction romantic comedy. I have also branched into self-publishing with my book A Death in the Family. It is a 1920’s murder mystery with a psychic twist. I would like to try and self-publish some more books.

Kissed by Water, Delwyn Jenkins. Book three in The Watchtower Chronicles. I love the series.


Do you have a favourite spec fiction movie or TV series?

Firefly. I thought the world Joss Whedon created was excellent. The characters were three dimensional and strong as well as being flawed.


Do you have advice for emerging writers?

Never give up and keep practising and learning. Join groups like RWA and attend conferences if you can. I am lucky to live in South Australia where we have the SARA group. (South Australian Romance Authors) They are a wonderful bunch of supportive writers. Find a critique partner. I have the wonderful Delwyn Jenkins and can’t begin to say how much we have supported each other on our journey.

Two things have helped Nicole cope since the murder of her husband. One is running her detective agency, and the other is her guardian angel Mira. When Mira is killed by a demon, Nicole accepts the help of Ridge, a long haired, cigar smoking diamond in the rough with wings. Things go from bad to worse when a replacement guardian cannot be found. She has to trust Ridge, which is tricky when she realizes there are no demons or angels, just parasitic aliens that humans have built the myths of these celestial beings around. Ridge isn’t an angel or a devil, but an alien half breed known as a Midworlder. He is also way too sexy for his own good, or is it her own good. 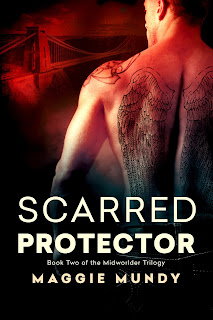 Scarred Protector
Angels and demons are not what you think. They are aliens, and the Midworlders are their representatives on Earth. An Angelic Midworlder called Heath goes to the aid of Evie who is about to be attacked by Demonics. He soon discovers she can see the angels and demons around her and is in grave danger. He is captivated by Evie who has physical and mental scars like him. They are tortured souls who are deeply connected by his past. There is an evil lurking inside Evie that could kill them both.


She has performed for many years in corporate entertainment for which she wrote her own sketches, which probably explains why her head is so full of characters. She loves writing romance, but thinks falling in love can be scary, especially in her stories where creatures of the night really exist.

~~~
Thanks for dropping by Maggie﻿