Cassandra L Shaw likes to focus on Adventures Beyond Reality with Urban Fantasy, Paranormal Romantic suspense, but she also dabbles in some contemporary romance.

Today, on Enchanted Orb, Cassandra talks about some of the things that inspired her to write Twin Flames, Book 1 in the Katoom Series. 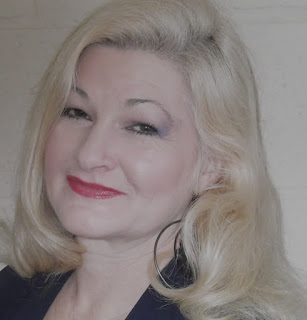 I read many genres but my go to list is usually, romance, suspense, paranormal and urban fantasy. I love the edge suspense brings to a story, how it kicks up the pace and can morph into horror or hope. It’s even better when it does both.

I also feel that a reader cheers on characters that have the chance of love and that a growing romance (either over one book or several) enriches a reader’s emotional journey.

So what inspires me to write a story, any story and Twin Flames?  I usually mentally see pictures of scenes – often like photographic stills or small action scenes that inspire me to start a story. I’m a very visual person but mostly my ideas come from my own imagination rather than pictures from the net.
In Twin Flames with a backdrop of forest, I saw a shiny silver creature that was distinctly female, horrified as she leaned over the mutilated body of a dead man on a set of train tracks.

Who wouldn’t be inspired to write THAT story?
That image instantly screamed – paranormal romantic suspense. A mix I love to read and write.
A dead body makes you ask questions. Who is he? What does he mean to my main characters? What was his story before he died? And the who the Hell killed him and why? All fun to speculate on to inspire the next scene then the next.

On about my third revision of Twin Flames I changed the image of Bliss (my heroine) at the beginning to be human in appearance. The Eli, Bliss’s race still has the silver beast inside them when really needed but I wanted my race to be mostly human.
Then came the who are the Eli questions. In developing the story of their race I had a lot of fun working out their genetic make-up, and how the metal in their blood would react (it shows their emotions on the surface of their skin). It was also lot of fun to add heightened olfactory senses which acts as a sexual enhancement. I got a real buzz out of writing that!!

Then I worked on the how and when they arrived on Earth. Working out how humans would react to an alien race even after 500 years of co-existence was sadly easy. Modern history and the horrors of World War II pegged exactly how things could go. And it was this, the fact we are so intolerant that has given me my plot arc for the entire series. It’s really only lightly mention in Twin Flames (book 1 of the Katoom series) but it takes a higher perspective in book two which I’m currently writing.

For me the parts of any story I love to write the most are action and love scenes.

In fact if I’ve hit a wall in my story or my muse is taking a nap or a frustratingly lengthy holiday, I will jump ahead and write a love scene or a fight. And it this action that often jump-starts my writing motor again. I also enjoy writing men. I love the way men interact, joke around and I use this for a little relief for the reader.

Funnily, for me the hardest part of any story to write is the romance. I have to keep asking myself, is it emotional enough, is it too much (need a bucket to throw up it’s so sickly)? Is it believable the characters end up together, believable they have conflict that is keeping them apart, believable that they would ever look at each other to start with?

To get over this I have to focus solely on the romance parts of the story many times to get the feel I’m after. Once I think I have it somewhere near where I want it, I send it to my critique partner. When it comes to romance she’s brutal and will soon tell me I need more romance here, here, and here. She’s also good at telling me I’m dragging it out - get them together - I’m over it. Got to love critique partners! 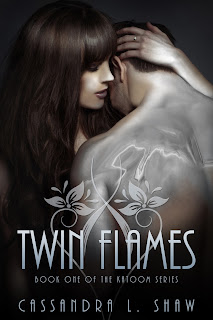 
Twin Flames Blurb:
She’s in grave danger, but she doesn’t want his protection…
After a long and bitter world-war for pure human supremacy, humans and two sub-species the Eli and Crea reside on Earth in an uneasy harmony. One morning on a jog, Bliss Jacobs finds a murdered fellow Eli. She scents the killer on the body, but other evidence is washed away by a savage storm, leaving Bliss as the sole witness and the target of an assassin—and forcing her back into the world of the man who shattered her heart.
He believes she is his destined mate, but he knows there are no second chances…
Kaid Sinclair is chasing more than his best friend’s murderer. He wants Bliss in his bed and in his life, but after their relationship went south several years ago, he knows he has to tread carefully. So how can he keep her safe, while still proving to her that they are destined to be mates, and he doesn’t just want to control her? All he wants is for her to be safe—but with a killer who sees her as Kaid bait, Kaid may have to choose…his life or hers? 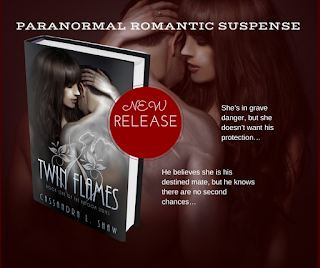 About Cassandra Shaw:
Cassandra L Shaw writes Urban Fantasy, Paranormal Romance, Romantic Suspense, & Contemporary Romance. She lives in a small farm on the Sunshine Coast of Australia. Her eclectic past includes fashion design, environmental science and years of drudgery as an office worker where she dreamed of NOT being an office worker. She discovered writing a few years ago and has decided that with its mix of art, writing craft, and study she’s at last found the career that suits her arty and academic mind.