Today's Darklight On... is with Darklight On's very own Cheryse Durrant.
So I've stepped in to Welcome, Cheryse! 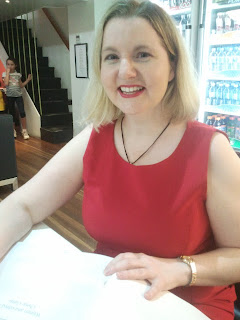 How did you come to write speculative fiction? What attracted you to the genre?
I remember brewing up witchy and fae games as a child and penning magical fairy tales. I LOVED spec fic in all its forms, especially John Christopher novels, Dr Who and the Ron Perlman/Linda Hamilton Beauty & the Beast TV series. As a teenager, I scoured my high school library for my specific tastes, but I read a book a night so I ran out of titles after a short time (it was a small bush school). I started writing my own stories about teenagers in spec fic worlds, but as I entered university, I branched out into high fantasy – Tolkien, Feist, Eddings – and was so overwhelmed by their plots that I stopped writing spec fic. It was only a decade or so ago that I took the plunge back into penning stories in this genre. I’m still just dipping my toes in, hoping I can do it :) 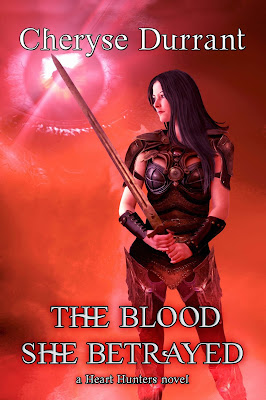 Your debut novel, The Blood She Betrayed, was released last week. Tell us a little about it.
Shahkara is a half-human/half-Taloner princess who travels to Earth via the Twilight Mists to find the ancient Elnara death lantern, her homeworld’s last chance of survival against the heart-devouring Taloners. In modern-day Brisbane, she is forced to rely on Max McCalden but he has his own problems – a manipulative billionaire father, a murdered brother. Still, nothing prepares him for her razor-sharp talons and half-Taloner blood, a blood that demands what she knows she can’t have – a human heart. Shahkara longs for love, but as deadly enemies attack at every turn, will her lust for Max destroy them both? Or will she find the strength to free both worlds from a threat more horrific than the demons that share her blood?

How did you celebrate its launch?
The paperback’s not launching until October so there will be a physical event then, but my friends and I celebrated last week’s eBook release with a Facebook party and a little champagne. Now, I’m immersed in a Hearts & Talons virtual book tour to promote The Blood She Betrayed. Tour prizes include books, gift vouchers and a 9ct gold heart-shaped crystal pendant. There’s more info about that at my website, www.cherysedurrant.com


Are you a plotter? Pantser? Or somewhere in-between?
I’m a pantser, I love the thrill (and the chase), but it does mean a lot of rewrites. I’m learning to become a better plotter with the view of improving my output J 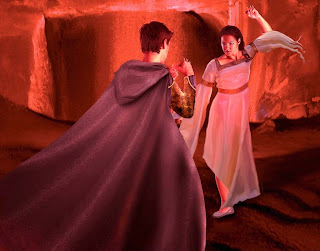 Do you have a favourite of your characters?
Shahkara – because of the sacrifices she’s made and is willing to make. She gave up so much, was disadvantaged in so many ways, but was still willing to sacrifice her own life for the good of her kingdom. Heroes are forged under pressure. It’s when we face our demons, that we show (and find) our true steel. She’s a hero under pressure, but also learns it’s okay to show her vulnerable side – and to find true love.

What sorts of characters or themes do you like to write about?
Strong women who face impossible goals. They also tend to struggle with a disease or handicap (or what they perceive as a weakness) that eventually becomes key to their happiness or success. In The Blood She Betrayed, Shahkara hates her half-demon self, but it’s her talons, healing abilities and super strength that enables her to save her world and people. Even when I started writing paranormal romances at 14, my heroines were flawed, but that ‘weakness’ ultimately became their ‘power’, once they overcame their fears and insecurities. Stories do parallel real life. The greatest demon that most of us will ever face is ourselves.

What are you currently working on?
The Ghost She Killed, the second book in my Heart Hunters series. It’s a wild ride and I’m loving every minute of it. I get to see my characters tested and further developed, and Carly plays an integral role in this plot. Wait until you find out what she gets up to! Like The Blood She Betrayed, this story also features some fabulous settings, including a huge casino/hotel complex in the heart of Brisbane, inspired by a stay at Caesar’s Palace, Las Vegas, a few years ago. I just had to bring a little bit of Vegas-style Roman empire Down Under. This is also where my Heart Hunters series evolves from Young Adult to New Adult, and there are lots of twists and turns. Every. Single. Page.

What is your favourite part of the process of writing?
When I’ve nailed a scene. It’s incredibly satisfying (probably because it takes me so long to nail one!)

What can we expect from Cheryse Durrant in the future?
There are a lot of new ideas spinning around inside my head but I’m trying to shelve them so I don’t get distracted. I’m contracted to write another two Heart Hunters books, but if they’re successful, I already have more ideas for future books in the series. I also want to rewrite at least two of my older spec fic manuscripts. I want to turn one into a children’s trilogy and the other into a Young Adult trilogy.

Who are your favourite spec fic authors?
There’s too many to list! I adore LJ Smith, Marianne de Pierres, Kylie Griffin, Rowena Cory Daniels, Jason Nahrung and Allison Goodman, to name a few. Yes, almost all of these are Aussie authors so either I need to get out more or Down Uner grows fabulous talent J


Do you have a favourite spec fic movie or TV series?
Heaps. I’m a Whoovian and a Wheedon. My all-time faves are Dr Who and Buffy, but I’m loving Once Upon a Time right now.

Do you have advice for emerging writers?
Don't let your fears, especially your sub-conscious, hold you back. If you want to be a writer – or anything else – prioritise it and make it happen. The greatest demon you will ever face is your own fears and attitude. Shape and master them until you are a dynamic force in the universe, bringing joy and inspiration to others. There’s still going to be tough and bad days, but you’re so much happier when you’ve put your dearest dreams into action (Oh, and PS: Walk lots and do yoga or pilates to strengthen your back – sitting at an office chair all day is a killer)

To buy The Blood She Betrayed:

As an eBook is available from Clan Destine Press Amazon, iTunes and Kobo.

The paperback can be pre-ordered via Clan Destine Press or Booktopia, but will be available in all good bookstores from next month (October).


Posted by Eleni Konstantine at 10:40

Email ThisBlogThis!Share to TwitterShare to FacebookShare to Pinterest
Labels: Cheryse Durrant, Darklight On