Please welcome Adina West as she opens a new facet of the DSDU Pack... The Call Story! 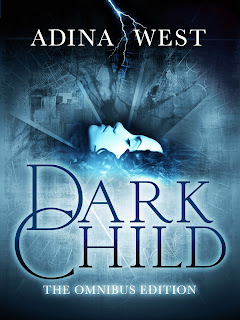 Dark Child is my debut novel, a paranormal fantasy initially published by Pan Macmillan’s digital-only imprint Momentum as a serialized novel in five parts starting 1 Feb 2013. With one episode released each month, it has gained a growing following, and on 1st May, Dark Child: Episode 4 debuted at #1 on the Apple iBookstore charts in Australia and New Zealand, and #4 on the iBookstore charts in the UK.

The concluding part, Dark Child: Episode 5, will be released 1 June together with the Omnibus Edition which combines all five parts in one novel as I originally wrote it.

Dark Child: Episode 1, the novella length introduction to this series, is available for free on promotion. Download it here.


My road to publication, and the story of the day I got ‘The Call” (or email!)

"You never answer your mobile phone," my sister always complains. "It's really annoying." She's right though - I often have my phone muted so it doesn't disturb me when I'm putting my son to sleep...and then I forget to turn the sound back on. So my call was actually a missed call.

But I'll start a bit further back, with the story of how this book came about.

I've been jotting down story ideas since I was a child, but it wasn't 'til I had my first child in 2007 that I started taking what I was doing seriously. I had less free time than I'd ever had before, but I knew I wanted to write.

I'd worked on dozens of ideas over the years, usually not getting more than a few chapters in (or less!) before abandoning them. One manuscript - for a historical romance - I'd spent about six years on, and it was almost complete at 75,000 words. But I was deeply unhappy with it, and not sure why. Looking back, it was because it was riddled with rookie errors - but at the time, I couldn't put my finger on the problem.
Anyway, I'd told myself that I wouldn't start another project until my historical was finished - but I was well and truly blocked. Meanwhile, I'd been reading some paranormal romance by various authors, and then Twilight fever hit...

Late in 2008, I found myself writing something - just a disjointed fragment - in a real-world setting but with paranormal elements. Over the coming months, I kept thinking about the story surrounding that one scene, and early in 2009 I started to write in earnest. By September, I had a complete first draft, and I revised and polished, and then got feedback from a group of wonderful beta readers. By the beginning of 2010, I'd incorporated their suggestions and revised some more, and then I started querying agents. Many months - and many rejections - later, I signed with my agent. She requested further revisions, and I completed them late in 2010.

Unfortunately the GFC hit then, and selling anything to publishers was harder than ever, so it wasn’t until early in 2012 that my agent sent the first part of Dark Child to Momentum, Pan Macmillan Australia's new digital-only division. Then a month or so later, in February 2012, she emailed to say that they'd requested the full. Still, after playing the waiting game for the previous year, I didn't let myself get my hopes up. On a Tuesday morning at the beginning of April, I was at playgroup with my kids, surrounded by screaming children, and somehow, I heard the beep of my phone as a text message came through. It was from my agent, asking me to call her! And then I checked my email (gotta love these smart phones) and there was one from her, again asking me to call her. Getting not one, but two messages was enough to have me in a mild state of shock, because my agent is more the email type. Until then, I don't think she'd ever rung me before. So I called her straight back - and she gave me the news that Joel Naoum, the publisher at Momentum, loved Dark Child! And he'd made an offer for world e-book rights. 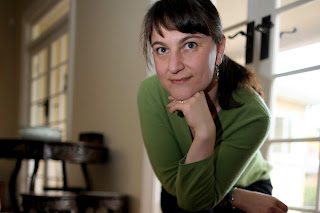 Honestly, I think I was in shock when I first heard - and rather than scaring all the playgroup kids by jumping up and down and squealing, I limited myself to telling all the other mums and contacting my entire family (and my beta gals, my wonderful cheer squad) to let them know the good news! It’s taken plenty of work to get Dark Child edited and polished and ready for the world, but now it’s out there and I couldn’t be prouder. Hearing from readers who’ve enjoyed Kat’s story makes all the hard work worthwhile! And now, of course, I’m working on the sequel…

Adina West grew up on a remote property on Australia’s east coast, in country New South Wales. She spent most of her childhood curled up with a book, and her first teenage job was shelving books at the local library, where she was cautioned more than once for reading them instead of putting them away.
Her first stories were laboriously typed up with two fingers on her parents’ old typewriter. Her dream of one day being a published writer progressed much faster after she learned to touch type and switched to a computer.

Adina lives in Sydney’s leafy north-west with her IT guru husband, two children, and a couple of unwelcome possums who really don’t know how to take a hint. You can visit her online at www.adinawest.com.