Mel Teshco has a new cover for Lusting the Enemy. It's a fantasy (dystopian) novella releasing with Ellora's Cave on December 19th. 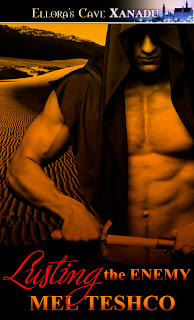 Akeisha is on a mission to be chosen as part of a harem for the desert king, Judas. She’ll use her body as a tool to entice and beguile him, do anything it takes to save the near extinct larakytes, her shape-shifting, silver panther tribe, from his human subjects trying to eradicate them.
What she never expects is to succumb to the wild ecstasy in his arms, a pleasure that threatens to expose her inner cat even as it transcends anything she’s ever felt from one of her own kind.
Falling in love with a human enemy was never part of her plans, but maybe there’s more to Judas than meets the eye.

Christina Ashcroft (aka Christina Phillips) continues her blog tour for Archangel of Mercy. Here are the dates for this week: