Welcome to the Enchanted Orb for September. Today Christina Ashcroft has graciously agreed to talk about what inspired her to write. While she's focussing on archangels at the moment, you should also know that she also writes hot historical romance. So settle in, and I'll let her tell you about where her ideas come from.

Take it away, Christina!

The Inspiration behind the World of my Archangels

Unlike many of my author friends, my mind isn’t overspilling with a thousand different story ideas. I don’t have twenty different heroes battling it out in my head, demanding that I write their story next. My process is painful in the extreme and I suffer from huge panic attacks that this book is the last one I will ever create.

But luckily, as I approach writing the final third of the current book, another hero or heroine takes up residence with my Muse and over the next few weeks make themselves very much at home. I have this superstitious fear that if I try to analyse where my ideas come from they’ll vanish, so if I can possibly help it I just kind of let it all bubble away doing its own magical thing. But since I’ve been asked where I find my inspiration, I’ve tried to nail it down!

My new series for Berkley Heat is about fallen Archangels. The first inkling for this idea came from a random comment several years ago by our very own Eleni (and I’ll be talking more about that in a couple of months!). From nowhere this archangel invaded my mind and I was instantly hooked, despite having no idea who he was or why he was rampaging through the universe. 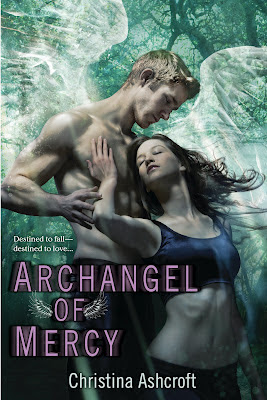 A few years later, after encouragement from my editor, I revisited this moody, Alpha Archangel in the hope he’d be more forthcoming with his story. But this time, a couple of other things began to stir into the mix.

I’ve always been fascinated by the myths and legends of a lost continent. What’s not to love about the idea of an ancient civilization that we know next to nothing about? This fascination was fed more than twenty years ago when I read something that pointed to evidence that the pyramids and Sphinx are thousands of years older than we’ve been led to believe.

Add to this my morbid delight with the whole Mayan calendar legacy and suddenly the world that my Archangel inhabited in his wild, untroubled youth unfolded before me.

It was the spark I needed to illuminate the dark side of the Archangel Gabriel. And while I still don’t have a thousand stories hammering in my mind demanding to be told, I do have a fabulous world with a multitude of archangels, demons, vampires and various other immortals. I might not know their stories yet, but I’m sure that when they’re ready to share they’ll let me know.

Christina Ashcroft writes about bad ass Archangels and the women who capture their hearts for Penguin/Berkley Heat. Her first book in this series, ARCHANGEL OF MERCY, is out on 4th December 2012. Hopefully the Mayans got it wrong…

Between an angel and a desperate woman comes salvation-
and a raw passion that challenges them at every turn…
When Aurora Robinson attempts to open a rift between dimensions to embrace her true heritage, an arrogant Archangel is the only one who can save her from the jaws of hell. And while she owes Gabriel her life, she’s determined not to fall at his feet-despite the desire she feels whenever they’re together.
After his wings were brutally destroyed millennia ago, Gabriel has no compassion for humans like those who ruined him and betrayed the ones he loved. But when he inexplicably finds himself defying ancient protocols to rescue a woman from a fate worse than death, he is shocked by the searing attraction he feels for a mortal.
As the ancient forces that seek to punish Aurora for her actions close in, Gabriel offers the tempting woman protection at his private sanctuary. But as they both succumb to their desires, they discover an even deeper connection-one that threatens to consume them.

Archangel of Mercy can be found at:
The Book Depository
Barnes & Noble
Amazon