Imogene Nix's Starburst is now under contract to Secret Cravings Publishing with a tentative release date of February 2013.  It is the final novel in the Warriors of the Elector Trilogy.

Congratulations to all our Dark Siders!

Happy Release Day for Sin's Dark Caress by Tracey O'Hara. It came out on July 31st! This is the third installment in the Dark Brethren series. 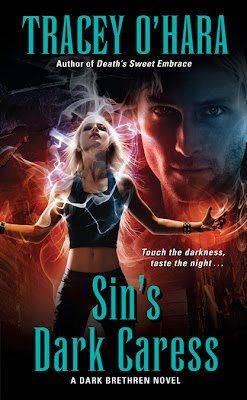 Astrid Cooper's latest release in the Monsters InK paranormal series, Fang Tango, came out on August 1st and has debuted at #4 on Extasy Books bestsellers list.
But the good news doesn't stop there! Older titles in the series - A Cat on a Hot Tin Roof, Christmas Ck & Vampire for Hire - made a return and also rank on the list at #11, #12 & #13.
And to top that off she's received some lovely fan mail from a couple of readers telling her how much they've enjoyed the series. 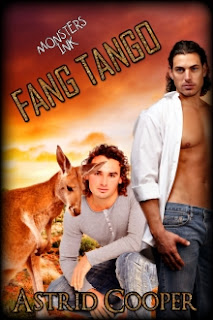 Anna Hackett has a cover for her upcoming release, Time Thief. 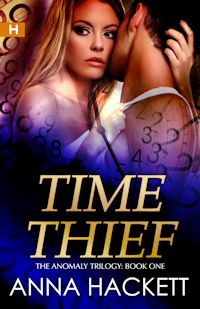 Rowena Corey Daniells has two books out this month! Exhile (fantasy from Solaris, out August 1st) and Price of Fame (ClanDestine Press, out August 18th). 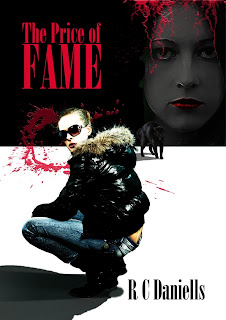 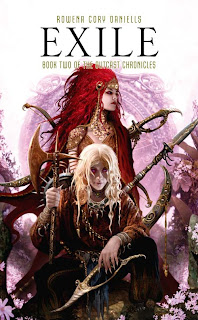 The threat of the Dark Brethren rising hovers over O’Hara’s impressively compelling series with wonderfully chilling menace. This third installment explores witch clans and murder by deadly dark magic. None of O’Hara’s protagonists are without flaws, but all have guts and determination in the face of dangerous odds. O’Hara is on a roll!

And here's another snippet from Book'd Out (you can read the full review here):


Sin’s Dark Caress is a fast paced read with plenty of action, exciting twists and strong characters. With its mix of murder, mayhem and magic I think its the strongest book of the three and though it could work as a stand alone, I would recommend reading the previous installments.

And another from Paperback Dolls (full review here):


Sin’s Dark Caress is a chillingly dark and twisted tale of just how far the Dark Brethren and their accomplices will go to unleash pure evil into the world. I found myself absolutely compelled to keep reading as the tension and urgency rose with each new murder. Sin’s warm, sweet personality complements the gruff McManus’s explosive temper in a comfortable way that only comes after years of lifelong friendship, but I find myself wishing that these two were the stars of the next Dark Brethen novel when it releases next year.

And Scooper Speaks also gave it a great review:


Tracey O’Hara’s Dark Brethren series gets better with each book...Sin’s Dark Caress is even better because it brings something I love. It is dark. Not horror dark, but heavier than the average romance. Evil permeates its pages, but it never lets you forget you are reading a romance.

Michelle de Rooy is a finalist the HODRWA "The Molly" contest with her fantasy romance "Appleseed".

Carolyn de Ridder has received an honorable mention for her manuscript, The Hostage. Her work was a finalist in the mystery/suspense category of the RWA Kiss of Death Chapter's Daphne Du Maurier Award for Excellence contest.

S.E.Gilchrist also received an honorable mention for her post-apocalyptic romance, Beyond Aquarius, in the RWA Southern Heat East Texas contest (paranormal category)! AND her novella, Bound by Love, is a finalist in the paranormal romance section of the Music City Romance Writers "Minuet of Love" contest.

Woot, to all our contest slaying Dark Siders!

The following Dark Siders will be attending the Australian Romance Readers Association Book-Signing Event (held in conjunction with the RWAustralia annual conference) at the QT Hotel on the Gold Coast, on Friday 17th August, 2012 from 4.30-6.00pm.
What a great wrap up for the week! Thanks, everyone, for sending on your good news.

Now, don't forget GND is going into hiatus for the rest of this month as many of the Dark Siders (myself included) are migrating to the Gold Coast or Auckland in preparation for or to attend the annual Romance Writers' conferences!

Good News Day will return the first week of September! See you then!
Posted by Kylie Griffin at 06:00 2 comments:

COMING UP THIS WEEK...


DARKSIDER TREKKING
(Where we've been)


Kylie Griffin is kindly taking over the Good News Day posts for a little while. Thanks, Kylie!

The Good News Day post on Tuesday will the last post until September. Keep well until then.

Posted by Eleni Konstantine at 14:41 No comments:

Better late than never I always say, so tonight, I'm belatedly extolling my love for mythical creatures by talking about the Banshee.

"You sound like a goddamn Banshee!"
Has anyone ever said this to you? No? Me either.

This phrase often follows the wailing cry of an agitated woman, so where does it come from? What exactly does it mean?


Settle down with a cup of tea and allow me to explain....

The Banshee originally hales from Celtic mythology. The word Banshee comes from the Irish meaning 'woman of the Sidhe' (the Sidhe many of you will recognise as the Irish Fae). Similarly in Scottish mythology the creature is called the bean sìth or bean-nighe
Almost all mythology surrounding the Banshee indicates that it is a female spirit and an omen of death.

Generally dressed in white or grey robes, the Banshee (according to legend) may be seen combing her long fair hair with a silver comb, or perhaps washing bloodstains from the clothes of the person doomed to die.

Having said that, the Banshee can appear in a variety of guises. she sometimes appears as an ugly, frightening hag, but also as a stunningly beautiful woman of any age that suits her. In some tales, the figure who first appears to be a "banshee" is later revealed to be the Irish battle goddess, The Morrigan.

A Banshee announces her presence by keening, that is, a wailing cry so incredibly high in pitch that it shatters glass (is anyone else looking at Mariah Carey in a different light?!)
The deathly cry of the Banshee may be heard, even though she herself may remain unseen.

According to folk beliefs, certain families have a Banshee attached to them (lucky!) and the Banshee's cry will herald death of a member of that family. The most common surname attached to the banshee is apparently Mac, and also the Airlie clan (phew!)

Perhaps unsurprisingly the Banshee or a mythical creature of considerable likeness can be seen in a few other mythologies around the world. There is La Llorona from Mexico (the  miserable and scary spirit of a wailing woman) as well as several Banshee like myths in post colonial North America, not mentioning the Scottish and Welsh interpretations of the myth....

I also had a quick look on Amazon and searched for "Banshee" in the title, and there was a surprising number of books, romance, mythology, horror on the topic. So if you're interested there is plenty of fodder for your muse out there.
Well, that's about it for tonight and just remember, the next time someone tells you to "be quiet, you sound like a Banshee!" You can gently quip "You'd better hope not," with a level of authority on the matter.