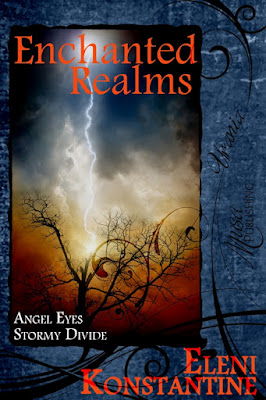 Well, finally, my stories 'Angel Eyes' and 'Stormy Divide' get to see the light of day in the collection, Enchanted Realms (now out with Musa Publishing).

It's been a long journey for these stories. I wrote them when I was studying a writing correspondence course between 1996 and 2000. Many rewrites and submissions later, they finally found a home.

I sent Stormy Divide to Musa's Urania line, and the head editor, Matt Teel liked it and wanted to buy it but it was a little short for the shorts. I didn't realise the shorts had to be over 4000 words as Musa had only just opened it's doors and was still accepting. I hadn't seen word count.

He then asked if I had anything else to pair up with it, and I sent him 'Angel Eyes'. Which he also liked and said yes too. Happy dancing.

So are the stories different from inception?

Not really. The stories are the basically the same. Angel Eyes had an element added into it so I can add to a competition, but really it wasn't the story that changed, it was the craft itself that had. Making things more active instead of passive, taking bits and pieces out or putting in to clarify. Right to the end it got those tweaks, and with the help of the editor, got the last lot only last month.

I'm pretty pleased with the result. And it goes to show you, not to throw ANYTHING away. Seriously, I could have given up on these stories but until now, they hadn't found their home. They were waiting for Musa who weren't in business yet.

Speaking of Musa and talking about perseverance, check out the story of the company here. Talk about a publishing house who is interested in its authors and having a transparent relationship with them, which is not common in the publishing world from what I understand.


I'm giving a copy (choice of ePub, pdf, Kindle, and Mobi formats) to one commentator.  All you have to do is answer the following:

Have you had something take the long way to achieve and been better for it?