Today's Darklight On is with Carolyn Wren. Welcome, Carolyn! 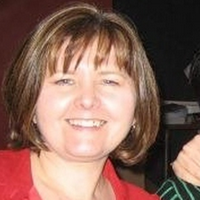 How did you come to write speculative fiction? What attracted you to the genre?
I have always read science fiction and fantasy. The first book in the genre I remember reading as a child was Arthur C Clarke A Fall Of Moondust. It fascinated me, opened my eyes to the wonderful possibility of stories beyond the everyday world we live in. That book started a life long interest in other realms, other worlds, both in literature, TV and film.


My own spec fiction story started with a stray thought at 3am in the morning.

When I started writing, my first books were a contemporary secret agent series. I had finished the final story that day and was laying in bed contemplating an emotional scene between two characters, wondering if it had enough impact or needed reworking.
I began to think of how the world would be an interesting place if we could read each others emotions as a physical sense. What would it be like to instantly know if someone loved you, hated you? If they felt guilty or sad, angry or depressed without them saying one single word?

My mind started to go in tangents. What if only a few people had this ability. Would they keep it secret? How would it affect their lives.

More tangents...what if they didn't only possess the ability to read emotions but project them. Would you make someone fall in love with you knowing it was only a lie? If you supressed someone's compassion, and increased their indifference, could you virtually brain wash them into committing acts against their nature?

By this time it was 4am and sleep was very far away. Just then I had a light bulb moment. Why am I laying here thinking about this world? why don't I get up and write it?

So I did, and my first paranormal story called Empathy was born.

Are you a plotter? Pantser? Or somewhere in-between?
Somewhere in-between. I always joke to friends that I need a prologue, an epilogue and a love scene in my head before I can sit down to write, and it’s true.

In my mind I have to know the beginning, the end, and have an emotional connection to at least some of the characters. Everything else happens when I put my fingers on the keys.

I sometimes think writing is a form of possession. The words and the story overtake you, ending up in places you never imagined, but I love that part of the process. The one thing I have no control over is my minor characters, they invariably end up as major characters in another book. There is a reason almost everything I have ever written becomes a series. For some reason they are never content with their small roles and start jumping up and down in my mind, waving and yelling at me to, ‘please tell my story.’

Do have a favourite of your characters?
In my contemporary work I have many. Jared Knight is the agent who appears in all of the seven secret agent books. He starts as a loner, certain he will never be able to form a solid relationship because of his deadly past.
Book four of the series, the one I have had so much success with in competitions, deals with an ultra secret female agent. She is tiny, strong, brave, witty. But with a vulnerable side and a traumatic past. Everyone seems to love her as much as I do, which is great.

But in my spec fiction world I have to say Dashiell, the dark dangerous vampire in my Stolen Ones trilogy. My dear friend and primary test reader Lynne dared me to write her a vamp book as a gift, and at first I refused as I didn't think I could offer anything more to the genre. But as a Scorpio I can never resist a dare, and the thought of trying to do something different appealed to me
.
I am so glad I did. It enabled me to create a character who people always ask, wait... Is he the bad guy? Is he the good guy?

Dashiell is responsible for one of my favourite reviews from a test reader who said, ‘Carolyn you created a self centred, arrogant control freak git and somehow made me love him by the end of the book.’

I love that quote.

What are you currently working on?
I am trying to complete the last of The Stolen Ones vamp trilogy. They are huge books, over 200k words each. As I said, I wrote them for Lynne as a gift, and the story started as a novella! (did I mention my minor characters tend to take control of me?) Obviously I got completely carried away but I do think it marks a new direction for me, a maturity in my writing. Multiple characters, multiple story lines evolving over the course of the three books and hopefully a very dramatic climactic ending, currently still in the planning stage.


What is your favourite part of the process of writing?
I have a mathematical background, and have only been writing for three years. This is all so new to me, almost every part is my favourite part. To create a world and people who are solely mine, who did not exist until I sat down at the keyboard, is extraordinary, exhilarating and very humbling because it was something I never dreamed I would do.

When I have finished a chapter, or even just a scene and I read it back, love it, and punch the air. That is the most amazing feeling.


What can we expect from Carolyn Wren in the future?
I am waiting on the results of the two contests, the Emerald and The Daphne du Maurier. That is for a contemporary story but I would like to seriously concentrate on getting it submitted, it would be wonderful to see the entire seven story series with one publishing house. Hey a girl can dream.

My book folder has two written prologues. One about witches, which I am very keen to get back to once I finish the last of the vamp novels. The other is a regency romance, but a regency romance with a difference. There are so many stories in my head I can barely keep track of them. I just need the time to write them all down.


Who are your favourite authors?
As a child and a teen I devoured everything sci fi and fantasy. Asimov, Arthur C Clarke, Anne McCaffrey were the favourites of my youth. Then I met my husband who opened up the wonderful world of Douglas Adams and Terry Pratchett to me. I still adore all of those authors.

Lately I have been loving JR Ward, Larissa Ione and Nalini Singh as they create the most wonderful series with multiple characters and storylines that evolve over several books. This is a direction I am also heading in, so I am interested from an author standpoint and totally in love with their books from a reader standpoint.

I really enjoy Matthew Reilly as I firmly believe no one can write a full on action sequence like him. Plus he is an Aussie author.

What are you currently reading?
I just finished Larissa Ione, Lethal Rider, the third book in the Lords of Deliverance series. I ignored everyone and everything and read it in one day, it was wonderful. Last week I read In A Treacherous Court by Michelle Diener ( a fellow RWA member) set in the time of King Henry the Eight. A great read. I am just about to start the sequel, Keeper of the Kings Secrets.

Next on my list is Shona Husk, The Goblin King.

In two days time another darksider has a book released. Starline by Imogene Nix, it is the new book in her Warriors of the Elector series and I am really looking forward to reading that one.

As you can see I am a very prolific reader.

Do you have a favourite spec fiction movie or TV series?  Is this the point where I admit to being a treckie? Well, yes I am.

My mum and dad loved everything Sci-Fi so I was raised with every possible Sci-Fi TV show known to man. I grew up with all the Irwin Allen classics, Time Tunnel, Land Of the Giants. I adored Lost in Space. All of the Gerry Anderson creations, Thunderbirds, Capt Scarlett, UFO, Space 1999.

But Star Trek was a firm favourite. My mum would bring me a mug of cocoa while I sat glued to the TV screen. Even today I still associate chocolate with spec fiction, no wonder I am a chocoholic.
I adore all of Joss Whedons work and have the entire series of Buffy, Angel and Firefly on dvd. I am glad The Avengers is doing so well at the theatre as I think he did a brilliant job writing and directing it. My current favourite spec fiction shows on TV are The Walking Dead, (even though it scares the pants off me.) Game of Thrones, Once Upon A Time, Grimm and Dr Who.

Do you have advice for emerging writers?
Write. I know that sounds simple. But I was 47 years old before I wrote a single word. For years I made up stories in my head, created characters whilst sitting on the train, imagined worlds and scenes during boring work meetings.

And I never wrote anything down. So my advice is to sit and just let the words come, it doesn't matter if you think the result is bad, or just plain lame. Keep going, create the worlds in your head. The result is wonderfully satisfying.

Also, don't be scared to show people. The very first thing I wrote was a scene with a man holding a woman in a dark room, she was dressed in a ball gown and he was in a tuxedo. I sent it to friends during their lunchtime as an anonymous email attachment. They immediately emailed back and asked what happens next.

Those three words, ‘what happens next?’ are what started my writing career.

Join me in wishing Carolyn all the best for the competitions she has finalled in.

Email ThisBlogThis!Share to TwitterShare to FacebookShare to Pinterest
Labels: Carolyn Wren, Darklight On