Welcome to the Enchanted Orb - a look at the inspiration behind the DarkSider's tales.

Our guest today is Nicole Murphy, author of the gadda series as well as a couple of other publications. 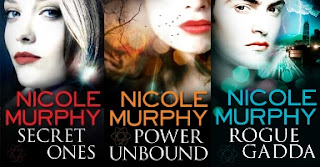 Today, she talks about... well, I'll let her tell you.

Take it away, Nicole!

Making your muse work for you.


Today I want to talk about FORCING inspiration. There can be a view that the muse is a strange, elusive creature and you have to coax and beguile him/her to work.

You can MAKE the muse work for you. Think of the muse as something like a puppy - all bouncy and all over the place with inspiration. Train it, and then you get a well-behaved beastie that works for you!

Now, this wasn't always my opinion. I thought you had to wait for ideas to come, and they were the only ones worth pursuing. But I was taught the error of my ways by a fabulous writer friend of mine, Ian McHugh.

Ian is a kick-arse writer. So kick-arse that he not only won a quarter of the L. Ron Hubbard Writers of the Future (something only a few Australians have done), but he won the entire competition (thus far the only Australian to do so).

Part of the prize is a week in LA with some of the biggest names in speculative fiction teaching you. Part of that was a story generating exercise. Ian enjoyed it so much that last year, he did it at a meeting of the Canberra Speculative Fiction Guild (CSFG) of which I am a member.

That night floored me. The story I produced as a result is one of the best stories I've every written, and it was interesting and intriguing and NO WAY would my muse have ever come up with it if I'd left him/her to their own devices (I haven't decided on my muse's sex - quite like the idea of gender not being part of the identity).

The exercise was in three easy steps. First, you are given an object to study, consider, take notes about. Mine was a Santa-shaped babushka doll. Second, you go out and meet a stranger and talk to them and see what they say (in the meeting, we talked to the person next to us but were given three topics to share and listen to). Third, you go into a library, or a bookstore and at random pick a book, then randomly throw it open.

Take those three elements, throw them together and see what happens.

At first, I wasn't too sure. I had my Santa-babushka and it was interesting. The person I talked to had some great stories about her grandmother working in the war to support her family and her in-laws having a ghost in the house. But I couldn't see any obvious connection, any story that would grow out of it. What did it all mean?

Then came the crucial third piece of the puzzle. I decided my random book would be a random internet article. I opened Wikipedia and looked at the "Did you know..." section on the first page. There was something there about the largest colosseum ever discovered outside of Rome. From there, I went researching the real Colosseum and from there, I found out about a building called the spoilarium, where the bodies of dead gladiators were taken and stripped of their armour. The bodies were discarded, the armour fixed for another gladiator to wear.

Suddenly, things were coalescing, moving in my mind. I opened Word and typed in the first line:
"I woke to find the ghost had stripped another layer."

The story flowed, as they sometimes do. It was about a mother, making the ultimate sacrifice for her children in order to secure their future. I knew I'd done something special when I took it to a critique session and the first person looked at me and said - "Wow."

I can't share more than that - am trying to sell the story at the moment - but the experience sold me on story generation. Since then I've used it a few times to either start a story or help a story along - choose a line of a song, open a book at a page and see what comes out.

And when you think about it, story generation like this isn't too far removed from editing. When you come across a problem in your story, you have certain parameters within which the solution must come. Story generation creates those parameters upfront and considering how much I enjoy the problem-solving aspect of editing, it's probably no surprise story generation has worked for me.

Try it for yourself - next time you're waiting for the muse to give you an idea, bypass him/her and try to generate the story yourself. There's lots of exercises online if you Google 'story generation'. At the very least, you might just scare your muse into being more proactive!