Happy Halloween Birthday to us!


Last year on this date, we started this blog and site. Now we are:

It's no coincidence we started this blog on 31st October. After all, what better date to start a blog about the Dark Side. And there's the fun side as well - think The Addams Family - it may be dark, but it's a comedy. Our members cover the whole spectrum.

Here, in the the Down Under lands of Australia and New Zealand, we don't celebrate Halloween like the North Americans do. Though it is gaining in popularity. Many stores I've been in this month have had a Halloween items on display. I even grabbed a couple of masks for my godson and his brother.

So this brought me to asking the DarkSiders the question
"What Halloween Means to You?"
and here are the replies.

On Halloween Eve my latest book is going to be released - unplanned, but perhaps "topical" given that I have a futuristic romance with villainous aliens causing mayhem and mischief in the dreamscape and the real world ... swirling mists and moans and groans in the ether... And of course Scotland and Halloween are synonymous.

Halloween means several things to me - the obvious "fun" of dressing up and being weird and no one bats an eye lid.

I was driving home from a Halloween party run by the Star Trek club. I was pulled over for breathalyser -- I had my waist length hair sprayed green and I was dressed in a black kaftan. My mother was dressed up as a Luke Skywalker, but with a vampire bat attached to her blood-spattered costume. The cops didn't react ... just did their job and waved me on.

The other thing that I think when Halloween comes around .... the historical and Celtic connotations. And how that weaves throughout our culture and story-telling. From the oral tradition of Celtic history through to our modern day story-tellers ... now the digital books. How far as a species we have come! 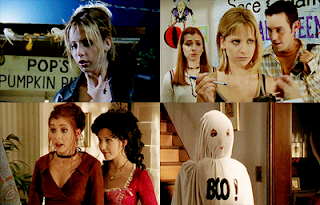 I‘ve always had a love hate relationship with horror. I went through a phase of reading Stephen King when I was in my teens but had to stop because I was freaking myself out. Buffy I’d record and watch during daylight. When Supernatural started I watched two episodes and couldn’t handle it (I went back during season three decided the plot and the testosterone on screen was too good to miss and watched from the beginning—however it still scared me and any more than two episodes in a row and I’m wired for anything that goes bump in the night). While Halloween has become all about candy and costumes, I love that paranormals and creepy creatures get their own celebration. It wasn’t that long ago that people gathered around the fire or locked their doors against the things lurking in the shadows.

Jenny Schwartz
I like that Halloween acknowledges there are monsters beyond the proof of science. More than that, it celebrates the delightful terror of the unknown.

Maree Anderson
It all started when my daughter turned five. Instead of wanting a fairy party, or a princess party—like all her little girlfriends were having—she wanted a Halloween party. And she wanted to be Mona The Vampire, from her favourite cartoon about a little girl who used to dress up and pretend she was a vampire. Only trouble with that idea? Her birthday is in August... have you any idea how hard it was back then to find Halloween party stuff for sale in Auckland in August??? 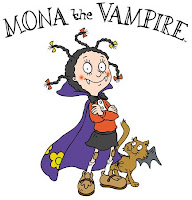 But I managed it. Thank goodness for old stock, is all I can say! And a Halloween party she had, complete with Halloween Headquarters banner, spider webs, balloon ghosties, home-made cardboard bats, fake severed finger biscuits (amazing how much like a brown icky dead fingernail a raw almond can look *g*), lolly-snake jelly, spider muffins, and ghostie cake. As for her costume? I found a cape and fangs, and with all her different coloured braids (a la Mona) she made the cutest little vampire ever! No surprises the boys from her kindergarten really enjoyed a non-girlie party where they could dress up as Frankenstein’s monster, zombies, ghosts or wizards ;-) The magician we hired went down a treat, too. (You gotta love five-year-olds. It doesn’t take much to entertain them.) But I think the highlight was the little boy whose dad painted his face, arms and hands green so he could be Frankenstein’s monster, and then realized too late that the paint wasn’t going to come off. His mother was majorly unimpressed! LOL.

Since then we’ve collected all manner of Halloween decorations. And every year we decorate our front window with our Halloween Headquarters banner, spider webs, glowing pumpkins and other spooky stuff. Then we fill our pumpkin baskets with sweets and treats, and wait for the knocks on the door. If DD and her brother aren’t going trick or treating with friends, they dress up and hand out the treats, while DH and I lurk in the background, waiting to see the expressions on the kids’ faces. Priceless! 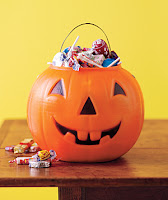 I love the idea of a time of year where the veil is thin. Regardless of our Southern Hemisphere when the season signals Beltane (& we should be jumping bonfires) I love All Hallow’s Eve and the following Day of the Dead. I wonder if it’s due to a lot of endings loom at this time of year (the calendar, academic/school). For me it’s a connection to the primal cycle of life and death and life again.

Of course the ever growing plethora of Halloween candy appearing in more recent years doesn’t hurt either (I say candy as in this context I view it as candy not lollies – thanks to years of US friends sharing what are the yummier options).

Eleni Konstantine
I'd always liked Halloween as a kid - the idea of dressing up as anything ghastly, and I think this rose from my love of shows like The Addams Family and The Munsters, and cartoons having Halloween specials. Fun if not a little scary. Alas, I don't think I ever dressed up as Halloween is not celebrated in Australia, at least when I was a kid. While Halloween has changed from it's Samhain origins, I like that we acknowledge the other side - the dark side.

As stated in a previous post, we are going to have a spookily amazing grand prize, and two runner up prizes.

and furthermore, we have announce runner up prize three!!!!

For your chance to win, please just comment on What Halloween Means To You?


We'll close comments on 2nd November so our NA friends have time to comment too.

Thank you to everyone who has supported us over the last year. We hope to celebrate with you again next year!