Magic Thursday: Do You Like It Face to Face? with Denise Rossetti

That sexy hero between the pages might be the dark 'n' deadly type, or a husky mechanic or one of those ruthless gorgeous billionaires. All yummy, sure - but do you have a mental image of his face?

I'm completely intrigued by how readers visualize characters, especially beautiful men. Which leads me to the question of covers… Specifically, the cover of Thief of Light, Book #2 in my Four-Sided Pentacle series.

The mass market edition of Thief of Light will be released on 2nd February, which is fabulous, of course, (yay!) but what fascinates me is the way the marketing folk at Berkley have changed the cover.

First, here’s the cover for the trade paperback - 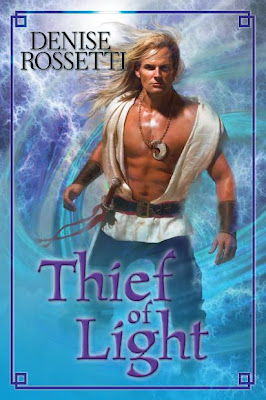 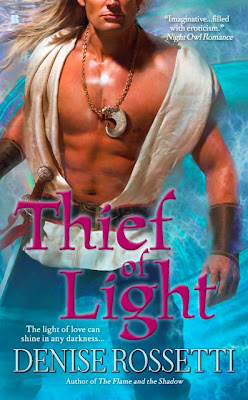 And to give you have some idea of setting and character, here’s the back cover copy -

Some desires are impossible to resist... In the elegant, subtropical city of Caracole, Erik the Golden is widely known as irresistible; his Voice an instrument of incredible pleasure, the stroke of velvet on bare skin. But the Voice is a curse as much as a blessing, for once Erik used it to steal a soul, and now he must pay.

Pruella Takimori McGuire is the business manager for the beautiful courtesans of the Garden of Nocturnal Delights. She deals in numbers, not Magick, and when Erik turns his charms in her direction, she sees only vanity, not a golden gift. If Erik cannot use his power to win Prue's heart, how can he truly possess her? How is it she can resist what others can't? She's either a torment devised by the gods to drive him mad - or Erik's last hope of salvation.

And all the while, a far darker power corrupts the foundations of Caracole - the Necromancer, who feasts on souls. When the Necromancer's hired assassin kidnaps Prue, Erik must harness his air Magick to recover the woman he has come to love more than life itself...

Erik Thorensen has Viking ancestry, he’s big and buff and blond, with eyes as blue as a noonday sky. *sigh* Okaaaay, the artist, the wonderful James Griffin, delivered all that in spades. (He told me the model is a real person, by the way. Good lord!)

So – which do you prefer? Face or faceless? And can you work out why?

I prefer not to see the full face. My heroes are always so stunning – well, to me anyway – that I have trouble visualizing their faces. Bodies I can do (heh heh) but faces? Nope.
Hugh Jackman? I hear you say. Johnny Depp? Well, of course, but my heroes are a combination of all their best features, way beyond any single mortal man. If you’re going to dream, do it right! All of which is kinda weird, because I often ‘see’ a scene in my head like a movie.

One of the things I absolutely adore about writing is that we all bring a unique imagination to what we read, each reader ‘building’ her own hero in her mind’s eye. In the final analysis, what you imagine matters a lot more than what I write.
Which version of the cover do you like best? Tell me why and you can have your autographed choice – trade paperback or mass market.

Posted by Denise Rossetti at 06:49