Welcome to this week's Good News post and what a bumper of week it has been!
Releases
Jess Anastasi
Jess' Dead Reality is released today from Noble Romance Publishing. Happy release day Jess!
Nicole R Murphy
Nicole's Power Unbound is out now. It is Book Two of The Dream of Asarlai series published by Harper Voyager Australia.

Covers
Keri Arthur
Keri has the UK cover for Darkness Unbound, the first book in her upcoming series, Dark Angel! What a fantastic looking cover! 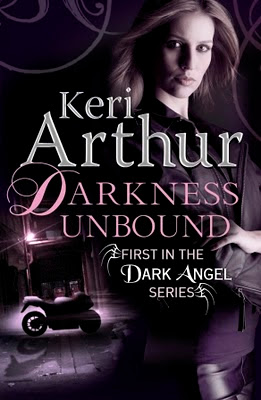 Nicole's story The Protector's Last Mission will be in the More Scary Kisses anthology. The table of contents was announced this past week. That is two for two for Nicole as her story The Anstruther Woman was in the Scary Kisses anthology published in 2010. Congrats Nicole.
Blogging
Jenny Schwartz and Janni Nell
Carina Press authors Jenny and Janni are part of a new blog called Here Be Magic, which is by Carina authors who write stories that are fantastical in nature.

Maree Anderson
Maree's From The Ashes, received a 5-hoot review from reviewer, Karia at Nocturne Romance Reads. Go the hoots!
Congratulations to all our Dark Siders with their good news.

New Member
We welcome Paula Roe to the Dark Side!! Paula writes for Silhouette Desire.

See you all next week for some more good news.

Posted by Eleni Konstantine at 07:23